Why Entertainment and Non-Sport Cards Will Grow in 2013

By Dave and Adam's Card World on December 31, 2012 in Sports Card News and New Products 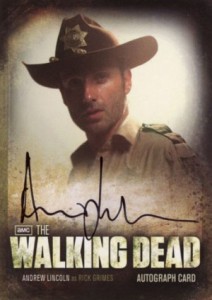 After a few down years, entertainment and non-sport trading cards are on the rise. A recent influx of new licenses with strong checklists have gone a long way in bringing the niche part of the market closer to the mainstream. And don’t expect that growth to slow down. While there are never any guarantees in the world of collectibles, it looks as though the growing trend will continue into 2013 and there are multiple reasons why.

Not long ago, the entertainment end of the hobby seemed to revolve around Star Wars, Star Trek and James Bond. All three licenses have had tons of sets over the years. They also enjoy one of the largest core group of collectors in non-sport cards. But it’s not growing very quickly. And for some of the long-time collectors, the licenses have grown a little stale. Topps and Rittenhouse are both doing great jobs at adding new spins to the franchises, but when you start seeing autographs of William Shatner’s stunt double, one has to wonder how long it can continue.

In the last year and a bit, The Walking Dead, Game of Thrones, True Blood, The Big Bang Theory and Fringe have all made their trading card debuts. And those are just a few of the more successful ones. There’s a feeling of freshness in entertainment trading cards that hasn’t been in some time.

Collectors can look forward to even more in 2013. Cryptozoic continues to unveil more licenses, including Archer and Once Upon a Time. And while it’s not a new license, the 1960s Batman TV series will get its first set since, well, the 1960s. Breygent has a Transformers set on the way that looks heavy on Generation 1 sketch cards, something that has never been done before and could be huge with collectors who grew up in the 1980s.

For many of us in the hobby, we’re wired for cards. Even if we take a break, we’ll likely eventually come back. Sometimes, though, the usual becomes stale. Sports sets have a lot of the same players, year after year. Even with drastically different sets, there’s a lot of repetition.

Branching out into non-sport cards offers more variety. They’re like an old deserted mansion, waiting to be explored. Every license is like a new room with its own character and personality.

Like sports, many non-sport sets are led by the promise of autographs. This is another area of great variety. Even if you don’t watch NCIS, a card signed by Bob Newhart can have a ton of appeal for those who loved the legend’s earlier sitcoms. The upcoming Big Bang Theory Seasons 3 & 4 includes autographs from Danica McKellar, who many remember as Winnie Cooper from The Wonder Years. The set also includes Rick Fox, Wil Wheaton and Mayim Bialik, all of who have found success outside of BBT. This is extremely common in TV and movie sets.

Most entertainment trading card sets cost less than $75, at least when they’re first released. Many are significantly less. Until Upper Deck’s recent Marvel Premier, this segment of the hobby still hasn’t gone to the high-end. This makes non-sport cards a much less risky proposition from a dollars standpoint.

For the average collector busting a box or two, the chances of making their money back is still slim. But if you’re looking for something to bust, organize and connect with, it’s a very reasonably priced proposition.

That said, in most sets, the major hits are much easier to land. Smaller print runs certainly help, but there’s usually a lot more parity or near-parity when it comes to autograph numbers across a release. Even when there are tough autographs, like Daniel Craig and Halle Berry in Rittenhouse’s James Bond 50th Anniversary Series 2, they fall every few cases. With sports cards, some breakers can go a long time without landing particular players.

Entertainment trading cards will likely never enjoy the widespread appeal of sports cards, but there’s still a ton of room for growth. Just like sports, it’ll take some risks to get there. It’s also important that companies don’t rely solely on what’s worked in the past. While more high-end products will likely be a turn off for some long-time collectors, it could also introduce others who are less interested in base cards and sets. There are also plenty of worthy licenses worth introducing and reintroducing with a modern hobby twist.

Dave and Adam's is one of the largest sellers of trading cards and collectibles in the world. Located just outside of Buffalo NY, the company operates two retail stores as well as the e-commerce website www.dacardworld.com
View all posts by Dave and Adam's Card World →
5 Fantastic Non-Baseball Cards in 2012 Panini Golden Age Baseball
Gatecrash Keywords