What to know about 2012 Upper Deck SP Signature Edition Baseball

By Dave and Adam's Card World on July 5, 2012 in Sports Card News and New Products

The latest Upper Deck product, 2012 SP Signature Edition Baseball released last week to mixed reviews. A product with nothing but autographed content is sure to be a big hit with collectors everywhere, especially if it offers a massive checklist. This year, SP Signature Edition has a total of 932 different autographed cards you can obtain with more than half serial numbered to 99 or less (the 450 base autograph set is not serial numbered).

Among the traditional single autographed cards of prospects, active and retired stars the set offers dual, triple and even up to eight autographs on a single card with some amazing player combinations. There are themes such as the 3000 Hit Club, 2008 Draft Class and Pride of the Nation, showcasing star players all over North America and Japan.

Another cool theme are the ‘Signature Season’ cards that feature  players from a specific team that had a dominate season, for example this 7-player signature card of the New York Yankees from their 1996 team. 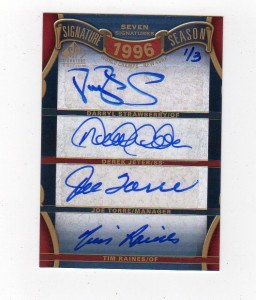 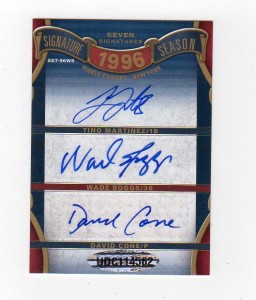 The base cards in this set fall under seven different groups (A-F) with odds falling from 1:1 Packs to 1:39 Packs.

If anyone completes the 450 card base set, we would love to feature it on our blog!

This Week in Cards
2012 Topps Triple Threads Football Due This Fall!!