Wednesday Night at the National: Sights and Sounds

By Dave and Adam's Card World on August 1, 2013 in Sports Card News and New Products

With Wednesday Night being preview night at The National Sports Collectors Convention the show floor opened to VIPs and things quickly got off to a solid start. Our main booth in the corporate area was very busy. Here are some sights and sounds from the show opening.

– The Topps redemption programs were hot from the start. Collectors were lined up deep into the show hall waiting to get their hands on the Yasiel Puig Gypsy Queen card and the 25 card blue wave set. The 8 card set with the 1952 sketch style was also very popular. It looks like there will be pretty long lines every day to start the show for the limited Topps redemptions. 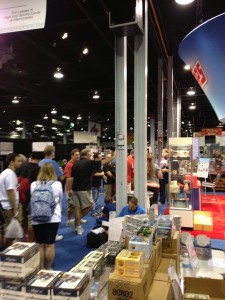 – The Panini packs have some awesome content in them. Collectors were scooping up boxes that qualify so they could get their hands on Panini National Redemption Packs. The Panini booth will be jamming throughout the show. We have a full setup of Panini boxes that qualify and we’ll be restocking that section frequently.

– The Upper Deck Case Breaker program sold out very fast as 25 collectors ripped through cases of Retro Football, Basketball, and Hockey. Customers were pleased with the promotion and products including this LeBron James autographed poster that Ian got his hands on. 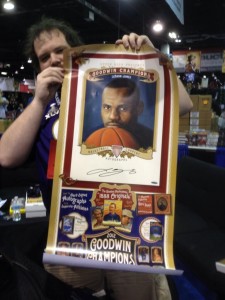 – 2012/13 Panini National Treasures Basketball has a lot of buzz around it in the high end collecting community. 2013 Bowman Platinum Baseball is also on fire at the show.

– We met a ton of collectors and customers on Wednesday Night. It’s always good to put faces with names. We also had a strong showing of younger collectors at our booth, including these two guys who were happy to pull some autographs from 2013 Upper Deck SPx Football. 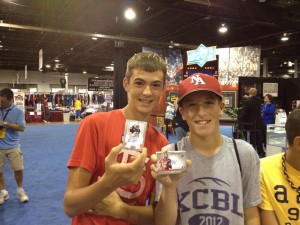 – We’ve had some customers breaking live with @dacwlivebreaks from the National. We’ll be bringing more live content and box breaks in coming days. You can watch our live stream at www.dacardworld.com/live

– Our buying team is off to a good start with a bunch of purchases ranging from vintage singles to modern cards.

Overall, we’ve had a great start and are looking forward to an awesome show. For show updates, follow us @dacardworld on twitter. If your at the show, be sure to visit us at booth 638 in the corporate area.

One Response to Wednesday Night at the National: Sights and Sounds