Upper Deck has been updating the redemption checklist for 2015-16 Artifacts Hockey on the company’s blog page. The latest update adds players for several of the team specific redemption cards as well as revealing the identity of some of the Wild Card redemptions.

Many of the top rookies for the 2015-16 class have already been announced as redemptions for their respective teams, including Connor McDavid, Jack Eichel, Max Domi, Artemi Panarin and Noah Hanafin. 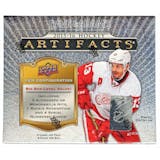 Dave and Adam's is one of the largest sellers of trading cards and collectibles in the world. Located just outside of Buffalo NY, the company operates two retail stores as well as the e-commerce website www.dacardworld.com
View all posts by Dave and Adam's Card World →
Dave & Adam’s offering double free gifts for the holidays
2015 Hit Parade Autographed Baseball Jersey Series 2 preview