Hockey fans only have to wait one more week until Upper Deck releases 2013-14 The Cup hockey. If you follow Upper Deck on social media then you probably have already been salivating over some of the preview pictures they recently posted. Here are a few sample to whet your appetite, if you have not seen them already. 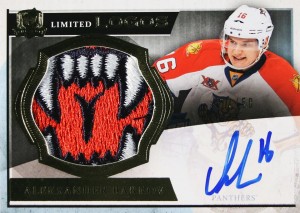 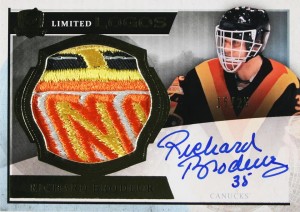 Limited Logos deliver the crest from a player’s jersey. I love the mouth from the Panther on Aleksander Barkov’s Florida jersey from his rookie season in the NHL. Did you know Wayne Gretzky scored more goals on Richard Brodeur than any other goalie during his professional career? I didn’t either until I read that on Wikipedia but I needed to come up with something. The Canucks’ V jersey from the mid 1980s is both great and terrible at the same time. UD took the classic Canucks skate logo and came up with some great logo cards for this set. With the big “V” on the front, the Canucks’ logo was actually on the sleeve of the jersey. 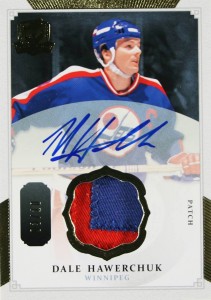 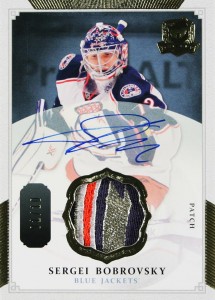 These patch cards are part of the base set but still have some great pieces. Again I had to pick a retro card with the Dale Hawerchuk Winnipeg Jets patch. The multi-color patch from Sergei Bobrovsky’s Blue Jackets jersey has some great texture to it. 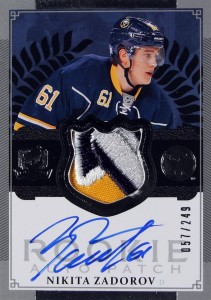 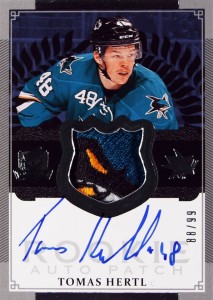 The Cup 2013-14 is the last official rookie cards from what was a solid group of newcomers in the NHL last year. I’ll admit including the Nikita Zadorov Rookie Auto Patch card is a complete homer call on my part but you have to love the Sabres crest. Tomas Hertl burst on to the scene last year for San Jose. This Hertl Rookie Auto Patch might be the best one of the bunch with the eyes and teeth of the Shark included. 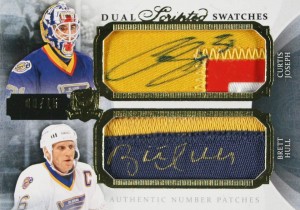 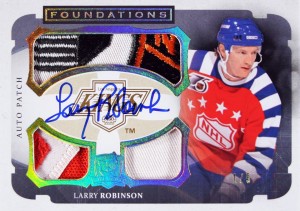 There are plenty of multi-player patch auto cards included in The Cup as well. Curtis Joseph and Brett Hull won Stanley Cups with different teams later in their careers but did go on some playoff runs with the St. Louis Blues. Larry Robinson finished up his legendary career in 1991-92 and played in the All-Star game that year. I’ll admit I’m not a fan of those All-Star jerseys but the 75th anniversary patch looks nice on the card.

Don’t forget DACW Live breaks will be cracking five cases of The Cup when it comes out on October 22. One of those breaks will be a team draft format. Get your spot before they’re gone!