The future looked bleak for Upper Deck Football trading card products after the the company lost it licensing agreement with the Collegiate Licensing Company (CLC). That future got a little brighter late last week when Upper Deck announced it signed agreements with several of the top players that will be selected in this year’s NFL Draft.

Many of these players will be featured in 2015 Upper Deck Inscriptions Football, which releases next month. This product will be the first chance collectors can get their hands on autograph cards for many members of the upcoming draft class.

“We have heard loud and clear from collectors and shops that there has been a void in the market for a premium early season release that includes awesome trading card technology, hard-signed autographs and inscriptions,” said Brandon Miller, Upper Deck’s collegiate sports brand manager in a company press release. “We believe 2015 Upper Deck Inscriptions Football will more than fill that void. We are very excited to introduce collectors to the different levels of rarity and assortment of inscriptions from players in this product. It gives every collector the unique feeling they have received something more special than an autograph card.” 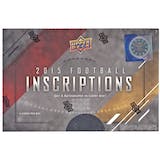 Dave and Adam's is one of the largest sellers of trading cards and collectibles in the world. Located just outside of Buffalo NY, the company operates two retail stores as well as the e-commerce website www.dacardworld.com
View all posts by Dave and Adam's Card World →
2015 Topps Chrome Baseball preview
2014-15 Leaf/In The Game Heroes & Prospects Hockey preview