By Dave and Adam's Card World on October 11, 2012 in Sports Card News and New Products 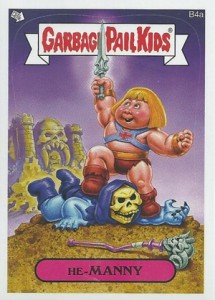 When Garbage Pail Kids debuted in 1985, they were meant to lampoon the Cabbage Patch Kids craze. The result was a craze unto itself. Within just a couple of years, there were 15 basic series released, scores of international sets and tons of spinoff products. It even inspired a Garbage Pail Kids movie, although that might be best left alone.

After a 15-year break, the snot and potty humor returned with 2003 Topps Garbage Pail Kids All-New Series 1. This led to several more releases and some renewed interest in the landmark line. And while Garbage Pail Kids haven’t had much of a break since the 2003 relaunch, it has actually been several years since a full set of new creations has been unleashed on the hobby. The last handful of big releases have been Flashback sets that are largely reprints of classic cards with new borders and a few modern twists.

But now they’re back — again — with 2012 Topps Garbage Pail Kids Brand New Series. And with a fresh start comes a fresh attitude. But maybe not that fresh, because the style is aiming to get back to its 80s roots where the cards were edgy, disgusting and disturbingly cute, all at the same time.

2012 Topps Garbage Pail Kids Brand New Series has the traditional split checklist. All 55 base set paintings have two different names. This makes for a 110-card set. And, yes, true sets have both the ‘A’ cards and the ‘B’ cards. Many of the gags look to connect with what’s happening in the world today. Perhaps none are better than the last entry in the set: Will Street and Juan Percent. 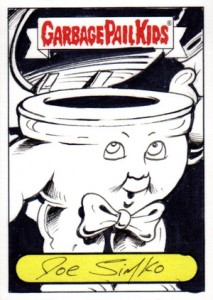 Something the original sets didn’t have that are now common in the hobby is parallels. 2012 Topps Garbage Pail Kids Brand New Series has several of them. Rare Gold cards and the hobby-exclusive Black cards are the most popular.

Adam Bomb, perhaps the most iconic of the Garbage Pail gang, gets his own insert set that puts him in the middle of many of history’s most important events. He’s also in both the lenticular Motion and Mix ‘n’ Match sets.

The rarest hits in 2012 Topps Garbage Pail Kids Brand New Series are Printing Plates and sketch cards. Sketch cards all have original artwork drawn directly on the card. While a lot of entertainment sets have sketches as a common hit, the secondary market hasn’t been flooded with GPK cards yet. This makes them much more desirable. And with a checklist of just nine artists, getting one from each should be considered by those looking for a challenge.

Perhaps the most intriguing part of the latest relaunch is a contest. Random code cards give collectors the chance to have their likeness transformed into a Garbage Pail Kid character in a future set.

Dave and Adam's is one of the largest sellers of trading cards and collectibles in the world. Located just outside of Buffalo NY, the company operates two retail stores as well as the e-commerce website www.dacardworld.com
View all posts by Dave and Adam's Card World →
Upper Deck to Produce 2012 Fleer Retro Football!
2012 Bowman Chrome Blue Wave Wrapper Redemption Program