By Dave and Adam's Card World on November 14, 2014 in Sports Card News and New Products, Topps

American League Rookie of the Year, Jose Abreu, made the cut but Topps snubbed NL Rookie of the Year, Jacob deGrom of the New York Mets. This is the 45th anniversary of the first Topps All-Star Rookie Team, which included Hall of Famer Willie McCovey. Since 1959 20 players that have made Topps’s All-Rookie Team have been enshrined in the Baseball Hall of Fame. All of this year’s honorees will have the Topps All-Star Rookie trophy adorned on their 2015 Topps Series 1 Baseball card next year. 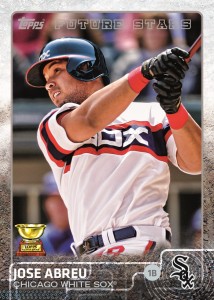 Dave and Adam's is one of the largest sellers of trading cards and collectibles in the world. Located just outside of Buffalo NY, the company operates two retail stores as well as the e-commerce website www.dacardworld.com
View all posts by Dave and Adam's Card World →
Dave & Adam’s featured on Beckett Radio
#DACWPulls: Press Pass Cup Chase Racing edition