By Dave and Adam's Card World on June 19, 2012 in Sports Card News and New Products

Topps announces that it has created two special sets for the 2012 National Collector’s Convention in Baltimore, MD.  Both are available exclusively via redemption at the Topps Booth.

Topps has created an exclusive 25-card sequentially numbered 2012 Bowman Platinum Blue Foil Parallel.  Collectors opening a full box of 2012 Bowman Platinum Baseball at the booth will receive the set.  The set will include Bryce Harper, Yu Darvish and more.  In addition, autographed versions of selected cards will be randomly inserted.

There is also a special 9-card 2012 Gypsy Queen MiniCard set featuring the hottest rookies in the NFL and MLB. Collectors opening 3 packs of any 2012 Topps/Bowman MLB or NFL products can redeem their wrappers for one of nine NFL/MLB Rookies.  The subjects are: 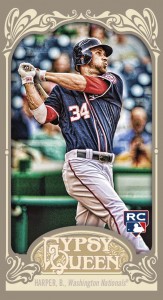