By Dave and Adam's Card World on September 23, 2015 in Sports Card News and New Products, Topps 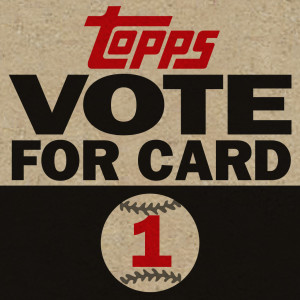 Starting Wednesday, September 23 baseball fans and collectors can vote online to decide who will be card #1 in 2016 Topps Baseball. For the first round of voting, which runs through October 4, fans can select from a list of 30 players that includes Mike Trout, Kris Bryant and Buster Posey. The five players receiving the most votes in round one will move on to the Final Five Vote round, which will take place October 5-11. Topps will announce the winner on October 12.

“Being featured on Card No. 1 in the Topps Baseball flagship has been an honor Topps has been able to bestow on baseball players for over 60 years,” said Clay Luraschi, Topps’ Vice President of Product Development. “We have featured stars such as Jackie Robinson, Ted Williams, Hank Aaron, Nolan Ryan, Bryce Harper and Derek Jeter. It’s a coveted spot and we wanted our collectors to be involved in that decision.”

To cast your vote just head to Topps’s blog page. 2016 Topps Baseball Series 1 is due out February 2016.

Dave and Adam's is one of the largest sellers of trading cards and collectibles in the world. Located just outside of Buffalo NY, the company operates two retail stores as well as the e-commerce website www.dacardworld.com
View all posts by Dave and Adam's Card World →
Remembering Yogi Berra
Dave & Adam’s is doing crabcakes, football and comic books this weekend in Baltimore