By Dave and Adam's Card World on April 30, 2012 in Sports Card News and New Products, Topps

The highly-touted Bryce Harper made his much-anticipated Major League debut Saturday and he did not disappoint.  The 19-year old hit a double into deep center and showed off his amazing throwing arm…a small glimpse of bigger things to come.

And while Harper was making his first impression, Topps, the exclusive producer of Bryce’s Autograph cards,  was rigorously making adjustments to products to get his 2012 Rookie Card and Autographed Rookie Cards in ASAP.

Here’s what collectors and fans can look forward to:

Bowman Baseball – In addition to having an Autographed Prospect Card in retail and a Bowman Black Autograph in hobby, Bryce will be Lucky Redemption # 2!  The card, which will be limited to 100, will feature Harper in the RC design and will include his Autograph.

Topps Series 2 – Harper will be card # 661, but because of limited timing the card will be short printed.  In addition, there will be an autographed variation of this Rookie Card in both hobby and retail.

Topps Archives – Collectors will find redemptions in both hobby and retail for Bryce’s Fan Favorites autograph (on-card) and the young star will be included as a short printed base card (# 241).

Topps Tier One – 25 redemption cards will be inserted into packs for his “On the Riseâ€ Autographed Rookie Card (on-card).

Allen & Ginter – A&G will include both Harper’s standard and mini base Rookie Cards at the regular rate.  The product will also include Harper’s autograph.  And for his Red Autograph limited to 10…those can be had by tearing open Rip Cards and finding the “Mystery Redemptionâ€ mini!

Complete Sets – Find Bryce’s 661 card, but with an all-new image.

And there’s more!  Harper will have Autographed Rookie Cards in the remainder of all Topps 2012 MLB products! 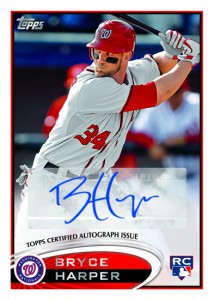 Phenomenal Pulls Case Edition: 1993 Upper Deck SP Baseball Case Yields 17 Jeter Rookies!
COUNTING DOWN TO 2012 BOWMAN BASEBALL AND YOUR CHANCE TO BE ON A BOWMAN CARD!