By Dave and Adam's Card World on November 1, 2007 in Sports Card News and New Products 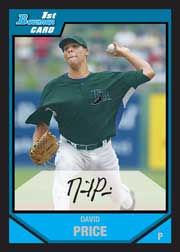 Topps announces that it has added several top names from the 2007 Baseball Amateur Draft to the much anticipated 2007 Bowman Draft Picks & Prospects. The additional subjects include both the first and second overall picks-David Price (image attached) and Michael Moustakas and six other high-profile players selected in the first round.

The subjects are as follows:

2007 Bowman Draft Picks & Prospects ships the first week of December and features 1 Autograph in every box.