By Dave and Adam's Card World on December 3, 2007 in Sports Card News and New Products 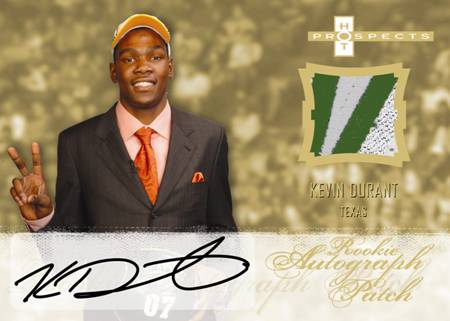 CARLSBAD, Calif. – (November 29, 2007) – In what has become as common as the leaves turning shades of brown, orange and yellow in the fall, Upper Deck has once again beat the competition to sign the top rookies for its young stars themed set, Hot Prospects Basketball. 2007-08 Hot Prospects Basketball is headlined by Kevin Durant and his 25 points per game and his fellow NBA Freshmen, such as Joakim Noah, Corey Brewer, Al Horford, Michael Conley, Jeff Green and Julian Wright.

Each of these newcomers to the pro hardwood have signed their autos to the popular auto patch rookie cards – which will drop at a rate of one per box – as well as the Rookie Materials letter cards and Draft Day Postmarks. 2007-08 Upper Deck Hot Prospects Basketball hits store shelves today (November 29).

“Hot Prospects Basketball celebrates the most anticipated rookie class since ‘Melo’ and LeBron in the 138-card set with three autograph or memorabilia cards including at least one autograph patch rookie card numbered to 599 or less per box, said Bill Beaman, Associate Basketball Product Manager for Upper Deck. “We take great pride in scouting out the best players to put in our world class basketball brands.

The product and brand teams in Upper Deck’s workshop have brought back iconic card inserts like autographed Rookie Materials and the Draft Day Postmark cards – autographed rookie cards stamped and postmarked from the 2007 NBA Draft in the Big Apple.

“As we continue to build this product, we wanted to bring back elements like Rookie Materials and Draft Day Postmarks that would make Hot Prospects the must-have NBA rookie card set each year,commented Chris Kollmeyer, Associate Basketball Brand Manager for Upper Deck. “This product is loaded with great content as each pack will have an insert, memorabilia, rookie or autograph card. 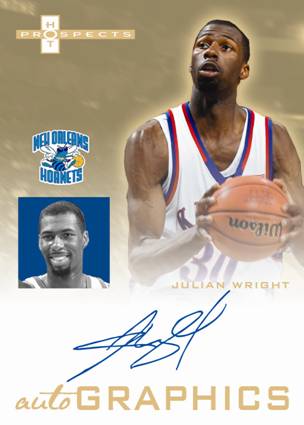 o Look for an insert, rookie, memorabilia card or autograph card in every pack on average

Dave and Adam's is one of the largest sellers of trading cards and collectibles in the world. Located just outside of Buffalo NY, the company operates two retail stores as well as the e-commerce website www.dacardworld.com
View all posts by Dave and Adam's Card World →
New Product Releases 11/27/07
Behind the Scenes at Dave and Adam’s Card World