The Price Is Right For Extra Edition

By Dave and Adam's Card World on October 15, 2007 in Sports Card News and New Products 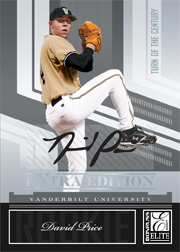 ARLINGTON, TX, – Donruss, a leading manufacturer of sports trading cards and the second longest running card company in the industry, recently announced the release of Donruss Elite Extra Edition. Donruss will take the field again with the release – a draft picks set that includes the top college and high school picks from the annual amateur draft.

With that, Donruss announced they have come to terms with Vanderbilt University pitcher David Price, the first overall pick in the 2007 Draft, taken by the Tampa Bay Devil Rays. The agreement will place Price’s images on Donruss Playoff packaging and his autographs and memorabilia in their products. He joins a star-studded checklist of young stars in the program and high-powered list of Donruss spokesmen including Vince Young, Adrian Peterson and Joe Namath.

“David Price had an outstanding career at Vanderbilt and will be pitching his way to the top soon,” said Donruss Marketing Director Scott Prusha. “He is a player you build a product around and collectors are going to get their first shot at his rookie cards, autographs and memorabilia in (Donruss Elite) Extra Edition.”

Price finished his junior season with the Commodores 11-1, with a 2.63 ERA – the only loss coming in a relief appearance in the NCAA regional when he was working on two days rest. He easily led the nation in strikeouts, fanning 194 batters in just 133 innings. Those stats earned David the Golden Spikes Award as the nation’s top amateur baseball player. He was also named SEC Male Athlete of the Year, SEC Pitcher of the Year and was selected by Baseball America as its College Player of the Year. Before being tabbed as the top pick in the draft, the former Murfreesboro, Tennessee native had to make room in his trophy case for the Dick Howser Trophy, the Brooks Wallace Award and CSTV College Player of the Year awards.

“We are extremely excited to have him aboard and look forward to a long relationship with David throughout the coming years,” adds Prusha.

Price will make his first appearance in 2007 Donruss Elite Extra Edition set for release in December.

Dave and Adam's is one of the largest sellers of trading cards and collectibles in the world. Located just outside of Buffalo NY, the company operates two retail stores as well as the e-commerce website www.dacardworld.com
View all posts by Dave and Adam's Card World →
Interview with Arthur Shorin (part 2)
Sport Kings Release Date Announced