By Dave and Adam's Card World on August 15, 2016 in Sports Card News and New Products

What a summer it’s been so far, but it’s August and that means that hockey is right around the corner. There’s no better way to cool off than checking out Upper Deck’s 2015-16 NHL Portfolio. Planned to launch on Aug. 17, this product is going to have a couple of firsts.

It integrates some of the rookie’s from the 2016-17 class in the form of  different “XRC” exchange cards from carryover rookies like Toronto Maple Leafs’ William Nylander, among others. 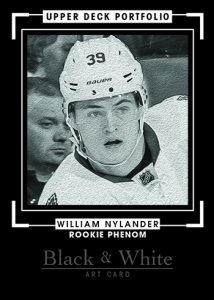 The XRC cards feature six players. Highly anticipated rookie skaters making their debuts in the 2016-17 season make up the first three. The last three are the aforementioned carryover rookies.  Nylander, Anthony Mantha and Pavel Zacha round out the four, five and six cards in the set. To add to already growing appeal there will be autograph versions of these.

All hockey fans have gotten to know Matt Murray in the past few months. There’s great news for fans of the Stanley Cup Champion goalie. This is the first NHL licensed product to feature Murray’s autographs live in the product. In fact all of the autographs will be live in the packs. Every collectors dream come true. Upper Deck is guaranteeing there will be no autograph redemptions in Portfolio. 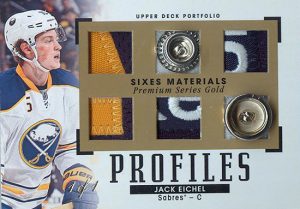 Autographs are not the only features in this product. Profiles memorabilia cards have also been added. There are wicked one-of-one versions that include laundry tags, buttons and patches.

It wouldn’t be a UD product without some beautiful art cards. Masterpiece Portraits are one-of-one hand-painted cards that were done on a minuscule canvas. 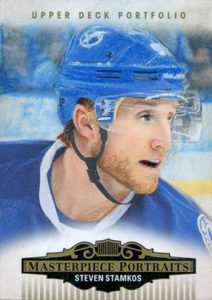 There’s good news for SP Game-Used collectors. If you can’t get enough, you’ll enjoy the wide array of rookie update cards from 2015-16 SP Game-Used set. Matt Murray is the cream of the crop in this subset and there are only 30 copies in the product. Keep an eye out for the signed parallels.

So take a shot at Upper Deck Portfolio when it releases next Wednesday.