By Dave and Adam's Card World on November 2, 2012 in Sports Card News and New Products 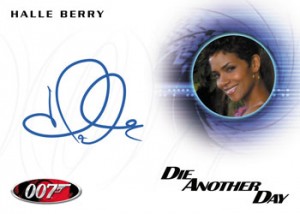 James Bond is no stranger to the world of cards. For more than 40 years, collectors have been able to chase sets featuring the suave spy. In recent years, Rittenhouse Archives has carried the franchise within the hobby. Since 2002, they’ve released almost 20 007-themed sets. Their latest, James Bond 50th Anniversary Series 2, arrives with plenty of autographs and a deep lineup of other inserts.

Autographs have been a key ingredient in nearly all of Rittenhouse’s James Bond trading card sets. 50th Anniversary Series 2 is no different. Many of the signers have been in other sets, but there is one big name making her autographed card debut. Academy Award winner Halle Berry is one of Hollywood’s superstars. While she’s been rumored to have autographs in other sets from other companies in the past, until now, the closest collectors have ever gotten were unreleased X-Men cards that made their way onto the secondary market.

Although he’s signed in the past, it’s doubtful that any collectors are going to complain about the chance of landing an autograph from current Bond, Daniel Craig. Former 007, Roger Moore’s signature is also on the checklist. Other highlights include Gemma Arterton, Honor Blackman, Richard Kiel, John Rhys-Davies and Sean Bean.

The set has a total of 56 different autographs with three coming in every box. 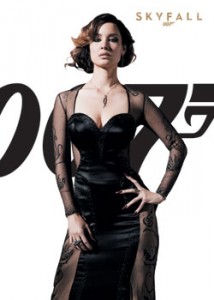 James Bond 50th Anniversary Series 2 has the first pack-inserted cards from the latest film, Skyfall, which has already racked up more than $100 million overseas. The first series had a poster card as a case topper. The poster theme continues here with a set of four character posters.

Most of the other inserts carry over from Series 1. Gold Plaque is heavy on gold foil, offering embossed title treatments. 007 Gold Gallery highlights many of the beautiful faces that have graced the screen. Finally, three Shadowbox cards give the three-dimensional treatment to the three most recent Bonds (the first three are in Series 1).

Inserted one per pack is a From Russia With Love card. The heritage-style cards are like a set within a set, offering 108 cards that look like they could have been released back in 1963.

The James Bond 50th Anniversary Series 2 fills in the gaps left by Series 1 — literally. The first set gave collectors the odd numbers, leaving pages half empty and waiting for a neighbor. Finally, they get their wish. The base set has 99 cards. Every third pack has a sparkle parallel.

2012 Rittenhouse James Bond 50th Anniversary Series 2 draws from five decades of movie history. With the franchise arguably strong than ever, it’s very possible that collectors could have 007 sets for years to come.

Dave and Adam's is one of the largest sellers of trading cards and collectibles in the world. Located just outside of Buffalo NY, the company operates two retail stores as well as the e-commerce website www.dacardworld.com
View all posts by Dave and Adam's Card World →
We’ve Updated dacardworld.com
A Big Week For Buying Comics!