By Dave and Adam's Card World on July 12, 2019 in Sports Card News and New Products

Origins Football is back and features the first On-Card Rookie Autographs of the 2019 NFL Draft class in their professional uniforms. Chase all newest rookies ready to burst onto the NFL scene including Dwayne Haskins, Kyler Murray, Drew Lock, D.K. Metcalf and many more!

Origins of Greatness pairs a legend of the past with a star from today and showcases some of the greatest players in a franchise’s history. These cards are limited to only 49 copies. Parallels include Gold numbered to 10, Green numbered to 5, and Black numbered 1/1.

Find an increased number of cards and subjects in this year’s Passing Stars, Rushing Stars, and Receiving Stars Autographs. These Autographs are numbered to 25 or less. Look for 1/1 Black Parallels.

Origins Autographs include Gold Ink variations of the top players from the 2019 NFL Draft.

Look for the amazing Six Star Signatures Booklet Cards that feature Six On-Card Autographs of the top 2019 rookies! These are limited to just 10 copies. Parallels include Gold numbered to 5 and Black numbered 1/1. 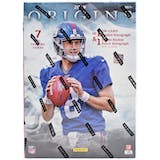