By Dave and Adam's Card World on July 3, 2019 in Sports Card News and New Products

Young Guns are the most anticipated Rookie cards of the year and the 19-20 Rookie class is shaping up to be one for the ages. Looks like a marriage made in heaven.

UD Canvas is a mainstay within the Upper Deck Series 1 Hockey release and includes a collection of 89 top active NHL stars and 29 of the top Young Gun Rookies, plus two checklist cards.

A new look to an old favorite featuring 40 superstar veterans and 10 rookies. Keep an eye out for Gold and Blue Foil Parallels (#’d as low as 10).

Pure Energy is an electric filled 50-card insert featuring all of the high energy players in the game.

Help celebrate our anniversary with our 30 Years of Upper Deck insert highlighting all of the classic Upper Deck hockey designs and featuring our spokesmen, Wayne Gretzky, Patrick Roy and Connor McDavid.

Generation Next returns featuring many of the top young players in the NHL youth movement. Collect the jersey and premium patch parallels.

The Clear Cut PETG inserts return at a rate of one per case, on average. This year’s themes include Cup Components to go alongside the multiplayer Clear Cut Foundations and Clear Cut League Leaders. 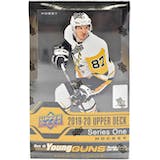