By Dave and Adam's Card World on August 31, 2015 in Leaf, Sports Card News and New Products

Eichel was drafted second overall by the Sabres in the 2015 NHL Entry draft from Boston University.

“Jack is easily the most NHL ready player in the 2015 draft,” said Leaf CEO Brian Gray, “Leaf has the unique opportunity to insure collectability and tremendous value for one of the greatest, if not the single greatest, American hockey prospect of all time.”

Eichel was drafted after first overall selection, Connor McDavid, who previously signed an exclusive agreement with Upper Deck. McDavid has several licensed autographed cards in circulation from his time with the Erie Otters of the Ontario Hockey League and Team Canada. Eichel does not have any autograph cards because of his student athlete status while playing in the NCAA. Leaf will release the first licensed Eichel autograph cards in 2015 Superlative Hockey, which comes out this November.

While the terms of the deal were not disclosed, Gray calls the agreement “easily the most lucrative autograph trading deal for any rookie in the history of the sport. He joins the ranks of LeBron James, Cam Newton and Kris Bryant as the largest rookie autograph deals in their respective sport.” 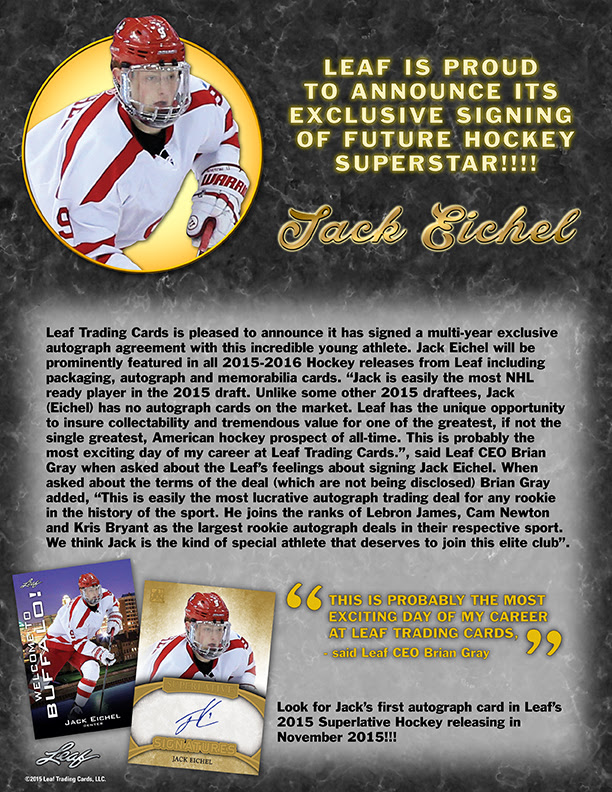 Dave and Adam's is one of the largest sellers of trading cards and collectibles in the world. Located just outside of Buffalo NY, the company operates two retail stores as well as the e-commerce website www.dacardworld.com
View all posts by Dave and Adam's Card World →
2016 Topps Legacies of Baseball preview
2015 Panini Spectra Football preview