By Dave and Adam's Card World on March 25, 2016 in Leaf, Sports Card News and New Products

Leaf Trading Cards took to Twitter on Thursday to respond to questions about the numbering of select Tom Brady autograph cards in 2016 Leaf Metal Draft Football. 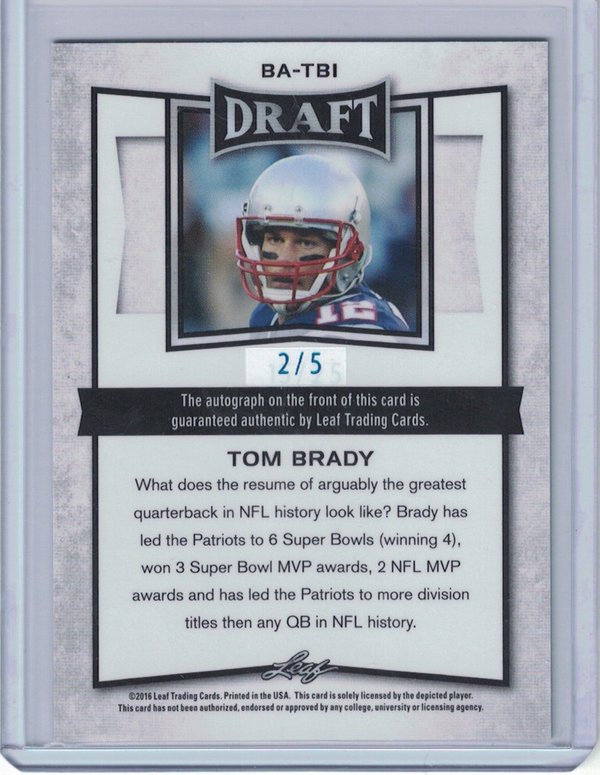 Some of the Brady autos appear to have corrected numbering on the back of the card done in white foil.

They were originally misnumbered. Since they were already signed, we had to renumber. Numbering matches the website. https://t.co/94PLhg4ij2

The corrections were made so that numbering would match the quantities published on the set checklist. The cards were hard-signed so it was impossible to just reprint them.

Leaf also pointed out that other manufacturers have used this solution in the past, including Topps.

Here is a 2008 Bowman Chrome card with same solution (although not as cleanly done) pic.twitter.com/uSkdqrGjCg

Finally, they offered a solution for anyone that pulls a Brady auto and is unsatisfied with the finished product.

Leaf’s CEO is offering to buy back any numbered Brady autograph out of Metal at $325 per!!!!! Email [email protected] to sell!!!!!

Dave and Adam's is one of the largest sellers of trading cards and collectibles in the world. Located just outside of Buffalo NY, the company operates two retail stores as well as the e-commerce website www.dacardworld.com
View all posts by Dave and Adam's Card World →
Dave & Adam’s goes West this weekend
2016 Topps Star Wars Masterwork preview