By Dave and Adam's Card World on September 3, 2008 in Sports Card News and New Products

The NFL season kicks off tomorrow with the Redskins taking on the Giants, and the football card market is starting to heat up. Recent 2008 releases such as Topps Chrome, Upper Deck SPx, and Playoff Absolute Memorabilia have gotten into the hands of collectors and are packed with this year’s top rookies. There are a variety of top players who are expected to have immediate impacts such as Darren McFadden, Joe Forte, Rashard Mendenhall, Felix Jones, Johnathan Stewart, Joe Flacco, and Matt Ryan just to name a few. 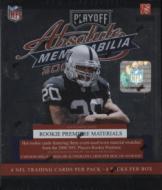 As many collectors know, the impact of these athletes on the field can directly affect their hobby importance and value on a week to week basis. If McFadden has an outstanding game in Week 1, products with his rookie card will be on the rise. Let’s take a look at a few rookies who may be flying a little under the radar, and could be termed “fantasy football card” sleepers.

1.) Tim Hightower – Arizona Cardinals RB. Hightower has the backup running back slot locked up in Arizona and will look to take carries away from Edgerrin James this season. Hightower has been impressive during the preseason. If he can continue to run hard and control any fumbling issues look for him to have a strong year and a bunch of hot rookie cards.

2.) Steve Slaton – Houston Texans RB. Slaton is in a 3-way jumble right now in Houston with Ahman Green and Chris Taylor. Slaton may be the back with the biggest upside for the Texans and is a dynamic player. His home run abilities on the field may equal a big hitting rookie card.

3.) Ray Rice – Baltimore Ravens RB. Rice is backing up a dinged up Willis Mcgahee and will get a lot of carries this year for the Ravens. Rice is a powerful rusher who could find his way in the end zone more than a few times in 2008. Coming from a school without a huge following (Rutgers), Rice’s rookie cards may still be flying under the radar at this point.

4.) Mike Hart – Indianapolis Colts RB. Hart may have to be considered a “Super Fantasy Football Card” sleeper, but with his huge fan base coming out of Michigan Hart’s rookie cards could really take off. It may take some depth chart shuffling or an injury, but the undersized Hart has the ability to be a dynamic situational player in the NFL.

5.) Now it is your turn. Who do you think is flying under the radar right now and has the ability to heat up the football card market?