By Dave and Adam's Card World on April 9, 2013 in Sports Card News and New Products 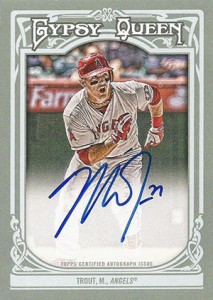 Now that the baseball season is underway, baseball card collectors can expect a flurry of releases in the months ahead. Coming out in consecutive weeks are 2013 Topps Gypsy Queen Baseball and 2013 Topps Tribute Baseball. While they come with significantly different price tags, they’re both notable for the amount of autographs they deliver. Not only is there a ton of ink, but the vast majority is signed on-card.

Released last week, 2013 Topps Gypsy Queen Baseball comes with an old-school vibe, kind of like Allen & Ginter without the non-sport content. Autographs fall two per box, which is much higher than A&G. The main autograph lineup in 2013 Topps Gypsy Queen Baseball has 67 different signers. They span several generations, including Hall of Famers, retired favorites, current players and rookies. Among the top players on the checklist are Bryce Harper, Mike Trout, Nolan Ryan and Willie Mays.

Not all of the Gypsy Queen signers are superstars. But isn’t a bad thing for player and team collectors. The biggest thing is the variety the set offers and the fact that all of the signatures are done directly on the card. 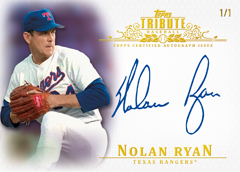 2013 Topps Tribute Baseball takes the same approach, but with a more high-end look and feel. The main single-signed autograph checklist has more than 125 different signers. That’s further expanded by many players having multiple autographs. Not only are all hard-signed, but they’re numbered to 99 or less. And while there are some lesser names, overall it’s extremely strong. Sandy Koufax, Ken Griffey Jr, Buster Posey and Hank Aaron are among those who have single-signed autographs in 2013 Topps Tribute and not in Gypsy Queen. The set also has some of the last Stan Musial signature cards.

Besides basic autographs, 2013 Topps Gypsy Queen and 2013 Topps Tribute have different levels of rare multi-signature and autographed memorabilia cards. So while collectors wait and see which superstars and rookies emerge this season, these early-season releases are delivering some excellent options for autograph collectors of all budgets.

Dave and Adam's is one of the largest sellers of trading cards and collectibles in the world. Located just outside of Buffalo NY, the company operates two retail stores as well as the e-commerce website www.dacardworld.com
View all posts by Dave and Adam's Card World →
#DACWPulls – Big Hits from the Past Week!
New 2012/13 Fleer Retro Hockey Releases Today!