Blog Homepage \ Sports Card News and New Products \ COUNTING DOWN TO 2012 BOWMAN BASEBALL AND YOUR CHANCE TO BE ON A BOWMAN CARD!

COUNTING DOWN TO 2012 BOWMAN BASEBALL AND YOUR CHANCE TO BE ON A BOWMAN CARD!

By Dave and Adam's Card World on May 1, 2012 in Sports Card News and New Products, Topps

2012 Bowman Baseball hits the street on May 9th and this year’s release promises to be BIGGER and BETTER than ever! The product is loaded with awesome autographs, awesome content and special surprises! Get in on the ground floor with Major League Baseball’s future stars by getting their first Bowman cards. Featured in this year’s release are future stars Dylan Bundy, Gerrit Cole, Trevor Bauer, Bubba Starling, Danny Hultzen and Anthony Rendon!
To celebrate, Topps will be counting down to the launch with a special Bowman Baseball announcement EACH and EVERY DAY until Bowman launches May 9th. What is in store for 2012 Bowman Baseball? Make sure you look for the announcements every day to find out.
Daily announcements will be made via press release and on facebook.com/topps.

Win Your Own Debut with Team Bowman

To celebrate the launch of Bowman Baseball we have included 10 Bowman Debut Golden Contracts randomly inserted in hobby boxes of 2012 Bowman Baseball. Each Golden contract guarantees you an autographed Yu Darvish baseball and one lucky winner will receive the following:

Get in on the ground floor and Uncover Greatness. Bowman, Who is next? 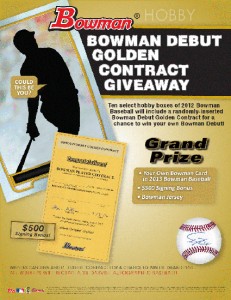 Topps Announces Bryce Harper Rookie Card Plans
COUNTING DOWN TO 2012 BOWMAN BASEBALL…Buy it, Rip it and Send it to Receive a FREE Pack of Exclusive BLUE WAVE Parallels