Chasing Gold: Collecting the Athletes of the 2012 Summer Olympics

By Dave and Adam's Card World on August 1, 2012 in Sports Card News and New Products

The 2012 Summer Olympics are in full swing. Thanks to the 2012 Topps U.S. Olympic Team & Hopefuls set released earlier in the spring, card collectors have tons of options. The set arrived with a loaded autograph checklist, lots of relics and a compelling list of inserts and manufactured relics. As expected, the release was received well when it initially hit. But in the weeks leading up to the London Games, it was something of a sleeping giant.

Now, with the medal moments soaring (even if they are on tape delay), several of the cards have woken up. Here are some of the hobby highlights from American athletes that have stepped onto the podium already. 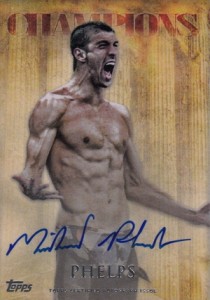 Hardly a surprise, Michael Phelps is now the all-time record holder for most Olympic medals. Because he entered the games a superstar, prices for Phelps cards were already high. However, with the record and the hype surrounding him, they could go even further. The first cards of the swimmer can be found in 2004 Leaf Rookies & Stars Football where he was in the Fans of the Game insert set. Phelps had a regular card, which many view as a rookie card, and an autograph.

Since then, Phelps has continued to appear in lots of sets, most recently in 2012 Topps Allen & Ginter Baseball where he had an autograph, relic and several mini parallels. 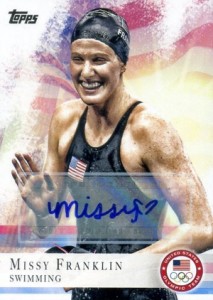 When 17-year-old Missy Franklin won the gold medal in the 100 m. backstroke, she became an instant star. Franklin has nearly 20 different cards in the 2012 Topps Olympic set. Her autograph was selling for around $50 just a couple of months ago. If you want one now, it’ll likely cost closer to $150. With a strong possibility for a couple more Olympics from Franklin, there’s a great chance there are many more Missy moments in the future. 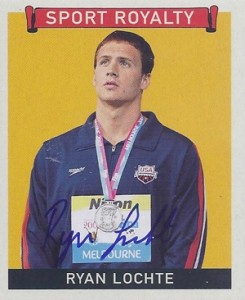 Ryan Lochte’s card situation is similar to that of Franklin’s. At the start of June his Topps autograph was selling for just a little more than $30. Now, those same cards are going for $150 to $200. Lochte’s trading card debut came in 2007 Upper Deck Goudey Baseball where he had both a base card and an autograph. The last 2009 Upper Deck Goudey Ryan Lochte autograph to sell online went for $350 — and that was before the games started.

My Drive to The National.
Setting up for the 2012 National Sports Collectors Convention!