By Dave and Adam's Card World on December 19, 2012 in Sports Card News and New Products 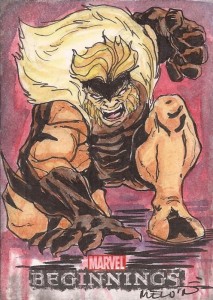 If those Mayans are correct, we have some pretty big endings headed our way. But as Upper Deck Marvel Beginnings III launches, it marks the end of one of the most ambitious lines in the history of non-sport cards. From the time that the line was announced, the plan was to make Marvel Beginnings a three-issue super set. It was going to cover the spectrum of the Marvel Universe characters.

To that, Upper Deck packed a ton of value into boxes. While they have their hits, all three Marvel Beginnings releases encourage set building — individually and collectively. Base cards, die-cuts and micro-etched inserts all look strong, bringing something fresh to a brand that has seen plenty of sets over the years.

For Marvel Beginnings III, Upper Deck isn’t changing the mix. Rather, it stays the course that was planned from the outset. For those that have stuck with the set for the last 18 months, there are no surprises. The base set concludes with numbers 361 through 540. Like the first two sets, they’re all character-based. Put all of them together and collectors have a nice little encyclopedia.

Etched foil Prime Micromotion inserts also return. At 60 cards, it’s moderately tough to build but not impossible. And for an insert set that falls every other pack, the cards look great. In many other sets, these could easily pass as a one-per-box type of insert. 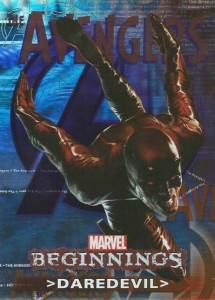 It’s a similar case for the Villain Die-Cut cards. Like the Prime Micromotion cards, they fall one in two packs but look like a higher-end basic insert. Earlier Marvel Beginnings sets had die-cut sets of the X-Men and the Avengers.

Generating some of the most interest are the sketch cards. They combine with autographs to fall one per box and have original art drawn directly on the card. With nearly 80 different artists contributing, there are a lot of different styles to chase.

HoloFX holograms have proven to carry strong value on the secondary market. Tough odds (1:3 boxes) and large checklists have made building sets a challenge. But that hasn’t stopped several collectors from going after them. Low supply and high demand take a dance and produce a nice little return. Popular characters add another level of intrigue as some can command a premium. This time out, the focus is on the Avengers.

Finally, there are Ultimate Panel Focus cards. Each has a custom cut panel from a vintage comic book. Think of them as the comic card equivalent of jersey card. Like holograms, these add more value if you look at them as unexpected bonus.

Marvel Beginnings III looks great, offers good value from a breaker’s perspective and entertains — the trifecta of a strong product.

Dave and Adam's is one of the largest sellers of trading cards and collectibles in the world. Located just outside of Buffalo NY, the company operates two retail stores as well as the e-commerce website www.dacardworld.com
View all posts by Dave and Adam's Card World →
Phenomenal Pull: Charlie Sheen Topps American Pie Autograph!
Historic Autographs Why the Hall Not? Box Promotion – FREE PSA Grading Voucher!