By Dave and Adam's Card World on December 30, 2012 in Sports Card News and New Products

Do you marvel over classic black and white movies? Did you win big from horse racing’s Triple Crown? Dream of being a stowaway on Gilligan’s Island? Have a crush on Marcia Brady? Chances are, if you grew up at any point before the 1980s, there’s a whole lot of nostalgia to look forward to in 2012 Panini Golden Age Baseball.

The recently released set follows a similar pattern to Topps’ Allen & Ginter line, freely mixing baseball and other parts of pop culture. However, there isn’t quite the randomness. Golden is more like Allen & Ginter meets Americana. The checklist is rooted strictly in the past, aiming to strike a cord with a nostalgic punch.

One of the most famous horses of all-time, the 2012 Panini Golden Age Museum Age Secretariat card features a piece of saddle. Among early sales, it has easily been one of the set’s hottest cards. Variations in the leather pieces make the chase a little more interesting. 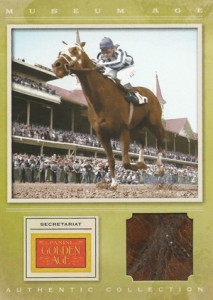 Best known for iconic role as Marcia Brady on The Brady Bunch, Maureen McCormick is the last of the Brady kids to have a certified autograph card. The other five appeared in the box set from Rittenhouse last year. Several of them have been in other celebrity-themed sets as well. But not McCormick. And while this isn’t a “Marcia Brady” card, it might be the closest thing we’ll ever get as the actress has tried to distance herself from the role. 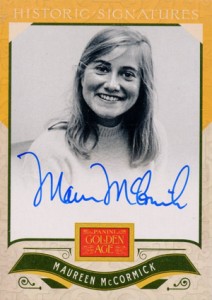 For many people, the name Johnny Weissmuller might not be the biggest name, but his achievements are iconic. He’s the winner of six Olympic medals in the pool, including five gold. But it was Weissmuller’s move to Hollywood that made him a legend. Of the many people who took on the role of Tarzan, it’s Weissmuller that’s remembered fondest. 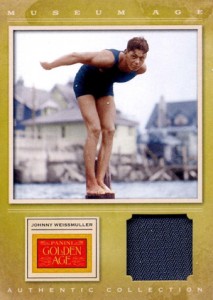 The Watergate scandal isn’t one of America’s crowning achievements, but it is part of history. The team of Bob Woodward and Carl Bernstein (also in the set) broke the story that eventually led to Richard Nixon’s resignation. Since then, Woodward has remained one of America’s most prolific journalists and authors. 2013 Panini Golden Age marks the first time he has signed for a set. 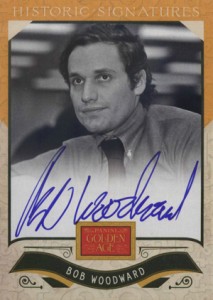 Make no mistake, this is a tough pull. Limited to 20 numbered copies, it features signatures from the last three jockeys to win the Triple Crown: Ron Turcotte, Jean Cruguet and Steve Cauthen. 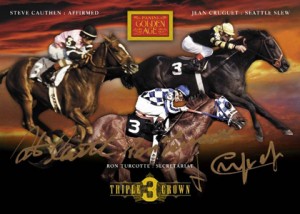 Dave and Adam's is one of the largest sellers of trading cards and collectibles in the world. Located just outside of Buffalo NY, the company operates two retail stores as well as the e-commerce website www.dacardworld.com
View all posts by Dave and Adam's Card World →
Dave and Adam’s Massive New Year’s Sale Starts Friday at 4 PM EST!
Why Entertainment and Non-Sport Cards Will Grow in 2013