$2.8 Million can fetch you a Honus Wagner Card

By Dave and Adam's Card World on September 10, 2007 in Sports Card News and New Products 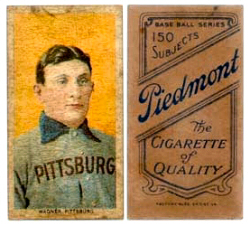 The “Mona Lisa” of baseball cards has been sold again, eclipsing the previous record of $2.35 million dollars. For $2.8 million dollars the 1909 American Tobacco Company Honus Wagner card was sold by Brian Seigel to an unnamed private collector.

With only 50 to 60 in existence, the value of this card has increased steadily over the years. In near mint condition the Honus Wagner has had a long and storied past on the auction circuit. Former Los Angeles Kings Owner Bruce McNall and Wayne Gretzky purchased this specific card for $451,000 in 1991, and it has been repeatability sold for record amounts.

Wagner’s card was one of the first cards produced by the American Tobacco Company for inclusion in packs of cigarettes. It was eventually withdrawn due to Wagner’s demands. Through the years there has been different reasons given for the withdrawal of the card, ranging from that he was a non-smoker that didn’t want to be associated with the Tobacco company to he wanted to be paid more.

Dave and Adam's is one of the largest sellers of trading cards and collectibles in the world. Located just outside of Buffalo NY, the company operates two retail stores as well as the e-commerce website www.dacardworld.com
View all posts by Dave and Adam's Card World →
Playoff Absolute Goes Live Today
Production Error in the 07-08 Fleer Ultra Basketball