By Dave and Adam's Card World on February 1, 2016 in Sports Card News and New Products, Topps

Topps laid the smackdown on wrestling collectors last year when they released their first high-end WWE product, 2015 Undisputed. Fans and collectors rushed to pin down autographs from a deep checklist of WWE Superstars and Legends. 2016 Topps WWE Undisputed will have a similar configuration with the promise of a hit per pack, including six autographs and two auto relics per ten-pack box. A total of 100 cards make up the base set, which will cover past and present WWE Superstars. There are three set of insert to compliment the base set: NXT Prospects, Divas Revolution and Undisputed Tag Teams. Base cards and inserts have five levels of numbered parallels: WWE Tag Team Championship Bronze (#’d to 99), Divas Championship Silver (#’d to 66), United States Championship Blue: (#’d to 25), Intercontinental Championship Gold (#’d to 10) and WWE World HEavyweight Championship Red (#’d 1/1). Low-numbered autograph hits include Faction Triple Autograph booklets, which are numbered out of ten. Family Ties Dual autos feature two superstars that happen to be related and are numbered to 25. One-of-one hits include Autographs Superstar Sketch cards with hand-drawn or painted artwork done by WWE personalities and Tribute Cut Signatures from legendary wrestlers. Undisputed Autograph Relics feature a wrestler signature plus a swatch of clothing or costumer. These have five levels of parallels that are the same as Undisputed autographs. Undisputed Relics are numbered out of 175 for 2016. The popular Divas Kiss cards make their way to Undisputed. WWE Divas have lent their lip prints to Divas Kiss and Clothing Relic book cards, which also include an autograph, a jumbo-sized relic swatch and are numbered out of five. 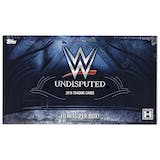 Dave and Adam's is one of the largest sellers of trading cards and collectibles in the world. Located just outside of Buffalo NY, the company operates two retail stores as well as the e-commerce website www.dacardworld.com
View all posts by Dave and Adam's Card World →
2016 Bowman Inception Baseball preview
DACW Buying Team: Massive hockey set purchase