By Dave and Adam's Card World on October 26, 2015 in Sports Card News and New Products, Topps

2016 Topps Gypsy Queen Baseball continues to incorporate the design and charm of baseball cards produced more than a century ago into a release highlighting modern day stars. Hobby boxes will come four hits, including two autographs and two relic cards. The base set for 2016 Gypsy Queen contains 350 total cards, including 50 short-prints. All 350 base cards have three levels of numbered paper-framed parallels plus one-of-one printing plates.

In addition to the full-sized parallels, there are mini card versions of each base card. Mini base cards land one per pack and have three levels of numbered parallels. There are also rare one-of-one stock variation parallels that come in either leather or clear versions. MVP Mini cards are an insert set that commemorate 25 different players to be named Most Valuable Players.

Each hobby box of 2016 Gypsy Queen comes with a loader box of ten mini cards. These will be the only place to find mini base card variations, which were done for 100 subjects in the base set. Rounding out the base set are three sets of inserts. New for 2016 are Power Alley inserts, which salute the greatest home run hitters of all time. Walk-Off Winners revisit memorable walk-off wins from the 2015 season as well as great walk-off moments in baseball history. Glove Stories highlight amazing catches. Look for one-of-one printing plates from all three sets. Autograph cards in Gypsy Queen feature on-card signatures. Base autograph cards feature four levels of numbered parallels: Green, Gold, Red (#’d to 5) and Black (#’d 1/1). There also signed versions of mini cards, numbered to 25, that can only be found in the mini card box. Look for signed editions of the MVP Mini cards as well. Both base and MVP mini autograph cards have one-of-one Black parallels. Auto relics also feature on-card signatures plus a game-used jersey swatch or piece of baseball bat. Red parallel versions are numbered out of five while Black Button parallels are one-of-ones. Mini Auto Patch booklets are exclusive to the mini-card load box and are numbered. Ancient Era Remnants are another new relic card that includes a buyback card from the 1920s, 30s, 40s, or 50s. The card will feature either an athlete, celebrity or cultural moment and is in a plastic Gypsy Queen frame. Laces Around the League cards comes with a jumbo-sized relic of a game-used baseball with stitching. Prime Bat Relics are rare one-of-one hits. Original Art Patch cards are also one-of-ones that come with a hand-drawn sketch as well as a patch piece. 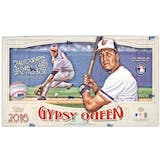 Dave and Adam's is one of the largest sellers of trading cards and collectibles in the world. Located just outside of Buffalo NY, the company operates two retail stores as well as the e-commerce website www.dacardworld.com
View all posts by Dave and Adam's Card World →
Upper Deck publishes checklist for 2015-16 Series 1 Hockey
2015-16 Upper Deck Series 2 Hockey preview