By Dave and Adam's Card World on March 16, 2016 in Leaf, Sports Card News and New Products

Boxes will come with eight autograph cards. Five of the autos will be Metal cards featuring in-game action images, numbering to 50 or less, colored parallels and background variations. Two cards per box will be hard-signed Selection Tour autographs. These will have on-card signatures and are numbered out of 50. Rarer versions of Selection Tour autos will come with inscriptions. Every box will also have one patch autograph card numbered to 35 or less. 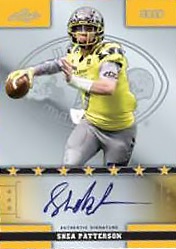 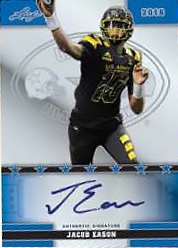 While we might not know the star power of these players for a few years, there are two highly-recruited quarterbacks in the set. Jacob Eason, the son of former Patriots quarterback Tony Eason, is a five-star recruit for the University of Georgia. Shea Patterson is a top ranked quarterback prospect that has committed to play at Ole Miss.

Dave and Adam's is one of the largest sellers of trading cards and collectibles in the world. Located just outside of Buffalo NY, the company operates two retail stores as well as the e-commerce website www.dacardworld.com
View all posts by Dave and Adam's Card World →
2016 Topps Opening Day Baseball offers Mascot card inserts
DACW Live’s Cody Count Cup Challenge