2015 Upper Deck Football will be the company’s final gridiron release under its expiring agreement with the Collegiate Licensing Company to use the trademarks and logos of select NCAA schools. Boxes will contain three autograph cards, including signatures of players that will be selected in the 2015 draft. 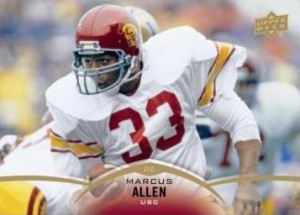 Each box of 2015 Upper Deck Football will have two UD Authentic Rookies insert cards numbered out of 500. A Cut Above are die-cut cards that highlight both rookies and veterans. 1990s/2000s College Football Heroes is a ten-card set that commemorates top players from that era. There are autographed versions available for all three insert sets. 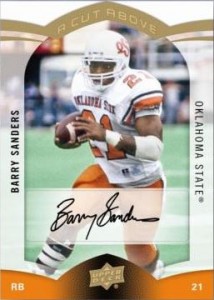 Additional signed cards include Rookie Lettermen Signatures. The manufactured letter patches are numbered to 75 or less and are signed on-card.

UD will once again salute some of the great traditions in college football with College Tribute Manufactured Patches. There are four patch cards per case.

Predictor cards are part of an Upper Deck contest to exclusive prizes. There are quarterback, running back and wide receiver versions. You can win by finding the card of the player picked first at their position in the 2015 draft.

Dave and Adam's is one of the largest sellers of trading cards and collectibles in the world. Located just outside of Buffalo NY, the company operates two retail stores as well as the e-commerce website www.dacardworld.com
View all posts by Dave and Adam's Card World →
2014-15 Upper Deck Premier Hockey preview
2015 Donruss Baseball preview