By Dave and Adam's Card World on June 12, 2015 in Sports Card News and New Products, Topps

2015 Topps Platinum Football is due out this November with an impressive new look and an emphasis on this year’s rookie class. Boxes will come with three hits: two rookie autos and a patch auto of a veteran or rookie player. 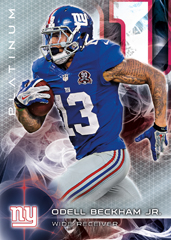 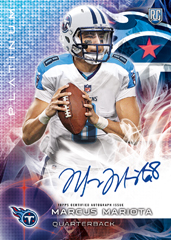 The 150 base card set is split into two groups with 100 veteran players printed on foilboard and 50 Chrome Refractor rookies. Veterans have just one level of parallel cards to chase with Gold parallels that land one per pack.

Autographed versions of the rookie base cards come with on-card signatures. These have a whopping total of nine levels of numbered parallels plus one-of-one printing plates.

Additional autographed content includes dual rookie autos that are numbered to 25. Hexagraph double-sided rookie cards come with six signatures (three per side) and are numbered to ten. 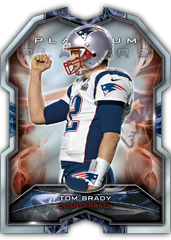 Topps Platinum also features some die-cut inserts that have autographed versions. Signed BCA and STS die-cut ribbon cards are numbered to ten, and unsigned versions of these land one per case. Platinum Players Die-Cuts highlight top veteran and rookie players. Regular versions appear once per hobby box, but autographed ones are a little harder as they are one-of-ones. 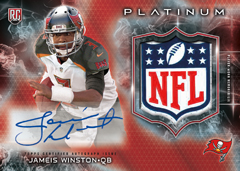 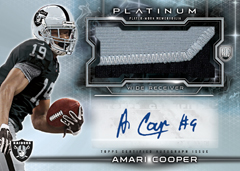 Rookie patch autos come with a multi-color patch piece plus a player signature. There are eight levels of parallels, including one-of-one Red Refractor parallels that will contain either an NFL Shield patch, team logo patch, football piece or a glove relic. Look for dual rookie patch autos that are numbered out of 25, and jumbo-sized rookie patch auto case hits. 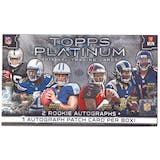 Dave and Adam's is one of the largest sellers of trading cards and collectibles in the world. Located just outside of Buffalo NY, the company operates two retail stores as well as the e-commerce website www.dacardworld.com
View all posts by Dave and Adam's Card World →
Matthew Dellavedova heating up in NBA Finals & with collectors
2015 Bowman’s Best Baseball preview