By Dave and Adam's Card World on December 24, 2015 in Leaf, Sports Card News and New Products

The Sportkings brand returns with the first new set in over two years. 2015 Leaf Sportkings pays tribute to the iconic trading cards produced by Goudey in the 1930s with a set that highlights some of the greatest athletes of the past 100+ years. Each box will feature an autograph as well as a memorabilia card. 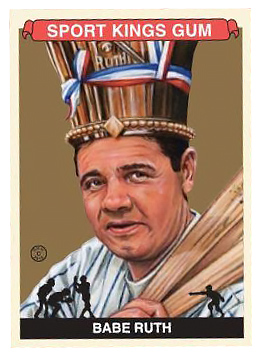 The base set has 100 subjects that span many different areas of the sports world. From baseball to boxing to football, Leaf Sportkings covers some of the most iconic athletes of all time. Look for mini parallel versions of all 100 base cards with one per box.

Dave and Adam's is one of the largest sellers of trading cards and collectibles in the world. Located just outside of Buffalo NY, the company operates two retail stores as well as the e-commerce website www.dacardworld.com
View all posts by Dave and Adam's Card World →
2015 Panini Elite Extra Edition Baseball preview
Dave & Adam’s “Leaders of The Pack” – Week 16

One Response to 2015 Leaf Sportkings preview