2015 In The Game/Leaf Metal Hockey preview

By Dave and Adam's Card World on December 18, 2014 in In The Game, Leaf, Sports Card News and New Products

The folks over at Leaf and In The Game have a new hockey product for 2015 that showcases the best and brightest on the ice on a special metal/chrome background. 2015 ITG Leaf Metal Hockey comes with an autograph on every card and some fantastic die-cut designs. Metal Hockey features the top prospects from the CHL, including projected #1 draft pick Connor McDavid, as well as former greats of the professional game.

Basic autographs or Metal Autographs feature signatures from CHL players. For several players in this set it is the first time their autograph cards have been made available. There are special parallel versions available but their availability is based on which country in North America you live in. American collectors can find USA parallels (#’d to 10) with blue stars etched in the background while Canadians will find Canada parallels (#’d to 10) with red maple leafs etched in the background. 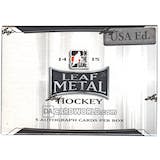 Dave and Adam's is one of the largest sellers of trading cards and collectibles in the world. Located just outside of Buffalo NY, the company operates two retail stores as well as the e-commerce website www.dacardworld.com
View all posts by Dave and Adam's Card World →
2014 Panini Immaculate Football preview
2014-15 Fleer Showcase Hockey preview