By Dave and Adam's Card World on October 16, 2014 in Sports Card News and New Products, Topps

When it comes to baseball prospects nobody does it better than Bowman. They will expand on that reputation this April with 2015 Bowman Baseball, which will increase its checklist of base chrome prospects from 110 to 150.

All 150 players will have a base Chrome Prospect card plus 60 more will add an additional on-card signature for Chrome Prospect Autographs. Both sets will have eight levels of parallels, including 1-of-1 SuperFractor parallel, Printing Plates and hobby exclusive Orange Refractors (#’d to 25). 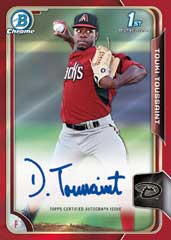 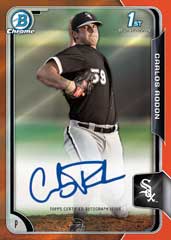 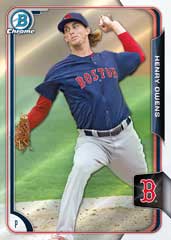 Bowman Scouts’ Top 100 builds on the prospect theme as an insert set ranking the top young players in the game from 1 to 100. Cards are printed using chrome technology and feature Die-Cut parallels plus Die-Cut Autographed Orange (hobby only #’d to 25) and Die-Cut Autographed SuperFractor (#’d 1/1) parallels. 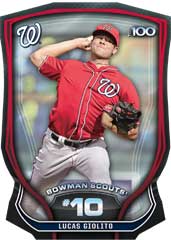 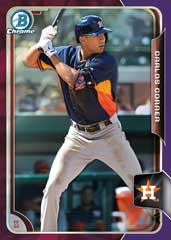 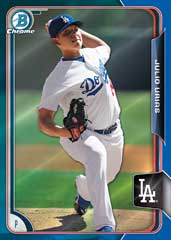 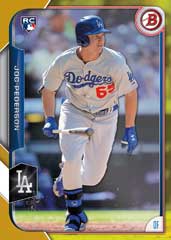 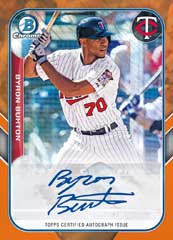 Bowman once again turns back the clock 25 years, to 1990, and brings us the new Rookie Recollections insert set. These come one per hobby box and highlight the rookie class from 1990, including Juan Gonzalez and Frank Thomas. Rookie Recollections have four levels of autographed parallels. 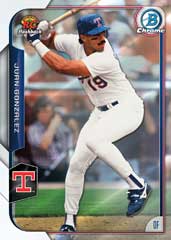 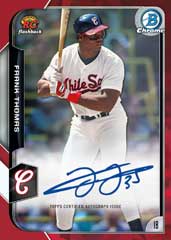 You’ll find one autograph card per box of 2015 Bowman Baseball. Chrome Rookie Autographs feature 20 first year players with on-card signatures and six levels of parallels. New for 2015 is Sophomore Standouts Autographs, which revisit the top rookies from 2014 with sticker autographs. Gold (#’d), Red (#’d to 5) and Black (#’d 1/1) parallels are available of each Sophomore Standout. 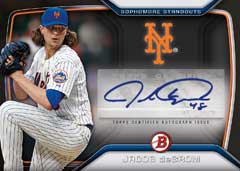 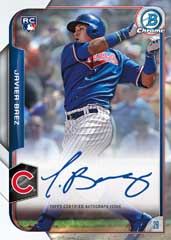 Look for four times as many Dual Autographs over last year’s set. Bowman Black Continuity Autographs come with on-card autos and are sequentially numbered to 25. All-America Game Autographs feature signatures from today’s top prospects that were captured back when they were in high school.The lone set of relic cards features players from the 2014 All-Star Futures Game. 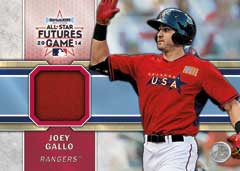 Dave and Adam's is one of the largest sellers of trading cards and collectibles in the world. Located just outside of Buffalo NY, the company operates two retail stores as well as the e-commerce website www.dacardworld.com
View all posts by Dave and Adam's Card World →
2014 Panini Playbook Football preview
2014 Topps Valor Football preview