2015-16 Upper Deck SPx Hockey features some unique hits as well as stunning acetate rookie cards. Boxes will come with one rookie jersey auto card or one retro rookie jersey auto. There are an additional two hits in every box that are either an autograph, memorabilia card or a premium insert. The base set for 15-16 SPx features just 60 cards. On top of that there are Rookie High Series Foil short prints that are found in one out of every four packs. The focus of SPx Hockey are the Acetate Rookie Cards, which will include the likes of Connor McDavid, Jack Eichel and Artemi Panarin. The base versions are numbered out of 299 with several combinations of jersey and autograph parallels. Rookie jersey auto are broken into two tiers with Tier 1 numbered out of 499, and Tier 2 a little bit harder to find with numbering out of 349. Regular jersey rookie cards are also numbered out of 349. There are two levels of parallels featuring either an autograph, a patch piece or both. Red parallels are numbered to 50 with Green parallels limited to just ten copies. More rookie jersey and autograph content can be found in 05-06 Retro cards that take from the 2005-06 SPx Hockey design. Retro jersey cards are inserted in one out of every 15 packs, jersey autos are numbered to 225 or less and patch cards (with or without an autograph) are numbered out of 15. Additional autograph and memorabilia cards include the return of Sweet Shot Collection: Signature Shots Stick Signings. These feature an autographed piece of hockey stick and are numbered out of 25. Monochromatic Jersey cards (1:20 packs) come with a simple jersey swatch and monochrome image of the player. X-Jersey multi-relics come with either dual or quad jersey pieces with Patch parallel versions numbered to ten or less. Trilogy Rookie Update cards can also be found in SPx. These include first-year players that didn’t make the cut in the initial release of 2015-16 Upper Deck Trilogy. Base versions are numbered out of 799 with signed cards numbered to 399 and Rare Auto cards limited to just 49 copies. 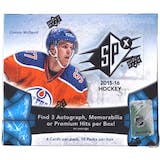 Dave and Adam's is one of the largest sellers of trading cards and collectibles in the world. Located just outside of Buffalo NY, the company operates two retail stores as well as the e-commerce website www.dacardworld.com
View all posts by Dave and Adam's Card World →
Last Week in the Lounge – October 21
Dave & Adam’s taking off for Tulsa this weekend