By Dave and Adam's Card World on September 18, 2014 in Sports Card News and New Products

2014 Topps WWE Road to WrestleMania lays the smackdown on our shelves next Wednesday (September 24). The set recaps the seminal moments in the WWE leading up to this past April’s WrestleMania 30 in New Orleans. It also pays tributes to the personalities and moments that made WrestleMania the mammoth event it is today.

The base set contains 110 cards and covers the events leading up to WrestleMania 30 as well the memorable moments from the event itself. There are three levels of parallels to go with the base set: Bronze (1:2 packs, hobby only), Black (1:24 packs) and Gold (10 per subject).

There are four insert sets that trace the history of sports entertainment’s biggest event. 30 Years of WrestleMania has 60 cards that cover the memorable moments of the event. The Streak is a 22-card set that depicts the Undertaker’s historic win streak at WrestleMania that was ended by Brock Lesnar this year. Ultimate Warrior Tribute features 10 cards that pay homage to one of the WWE’s most popular superstars, the Ultimate Warrior, who passed away early in 2014. Queen of WrestleMania is an eight-card set that feature WWE Diva Trish Stratus.

You will find two hits of memorabilia or autograph cards in every box of 2014 WWE Road to WrestleMania. The autograph cards have both single and double signatures from WWE Superstars. Look for the first appearance of autographed Topps WWE cards by Lex Luger, Kevin Nash, the “Mouth of the South” Jimmy Hart and Ron Simmons. Hulk Hogan autographs are appearing in a Topps WWE product for the first time since 2005. Current WWE Superstar Roman Reigns and Trish Stratus autographs are also included. The Mat Relic parallels have the autograph on a piece of the ring mat from WrestleMania 30.

Memorabilia cards contain either a piece of the WrestleMania 30 ring mat or swatches of costume worn by WWE Superstars. There are also Undertaker Dual Relic cards that have pieces of both The Undertaker’s hat and pants.

There are also printing plate cards inserted into packs. There are base card printing plates as well as memorabilia card plates complete with swatches of material. 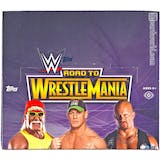 Dave and Adam's is one of the largest sellers of trading cards and collectibles in the world. Located just outside of Buffalo NY, the company operates two retail stores as well as the e-commerce website www.dacardworld.com
View all posts by Dave and Adam's Card World →
Revisiting the Hockey Rookie Cards from 2013-14
2014 Topps Prime Football preview