By Dave and Adam's Card World on December 17, 2014 in Sports Card News and New Products, Topps

Topps Strata is one of the more unique football releases by the company. It is centered around auto memorabilia cards with a relic piece covered by clear acetate that is signed by the player. Boxes of 2014 Topps Strata Football contain one Clear Cut Autographed Relic card plus one autograph and one relic card.

About 50 different players have autographed versions of their base cards, including six different levels of parallels. Look for hobby exclusive one-of-0ne Quartz parallels.

There are two sets of die-cut insert cards. Strata Die-Cuts features 50 players on a card that is cut in the shape of the NFL shield. Quarterback Die-Cuts showcase 30 NFL QBs in die-cut fashion. Both sets have autographed parallels that are numbered. 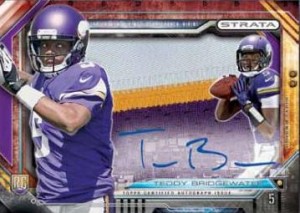 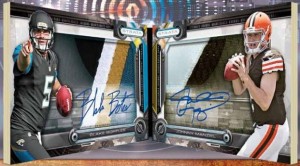 Strata Signature Relic Cards land one per case and come numbered with a multi-layered design. Over 35 different rookies are featured, and there are three levels of parallels, including Ruby Patch, Rivet Patch and Rivet Swoosh. The Rivet parallel cards are held together by a rivet that allows the different layers of the card to fan out. 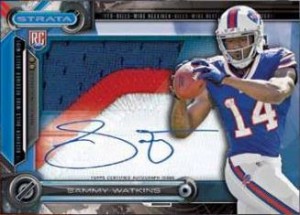 Veteran Strata Signature Patch cards are similar but only five players were included. Regular versions are numbered with Rivet parallels numbered to five.

Strata Signatures use a similar layered design as Strata Signature Relic, but only contain a player signature. These are hobby exclusive and are numbered to 50. One-of-one Strata Quad Autograph Book Cards feature signatures from four different rookie players. 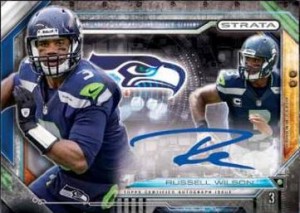 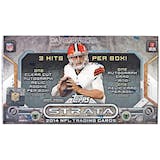 Dave and Adam's is one of the largest sellers of trading cards and collectibles in the world. Located just outside of Buffalo NY, the company operates two retail stores as well as the e-commerce website www.dacardworld.com
View all posts by Dave and Adam's Card World →
DACW Live’s 12 Breaks of Christmas
2014 Panini Immaculate Football preview