By Dave and Adam's Card World on September 18, 2014 in Sports Card News and New Products, Topps

Topps Prime is stacked with autographed relic cards. There are five kinds of auto relics to collect that come with different types of swatches.

Prime V cards are only available in hobby boxes. They feature five different levels of parallels that are numbered in limited quantities including a 1-of-1 Gold Rainbow parallel.

There are also Autographed Rookie and Veteran Variations. Both are sequenced to various quantities. Autograph cards also have the same five levels of parallels that the base cards come in, but in much more limited quantities (especially the Rookies).

Dual Combo Relics pair a rookie and veteran player with a jersey relic from each. Quad Combo Relics feature two rookies and two veterans for a total of four jersey swatches. Prime Patch cards with a rookie jersey swatch. All three subsets come in three levels of parallels only available in Hobby packs: Copper Rainbow (#’d to 25), Silver Rainbow (#’d to 10) and 1-of-1 of Gold Rainbow. 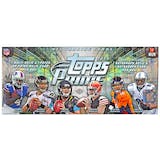 Dave and Adam's is one of the largest sellers of trading cards and collectibles in the world. Located just outside of Buffalo NY, the company operates two retail stores as well as the e-commerce website www.dacardworld.com
View all posts by Dave and Adam's Card World →
2014 Topps WWE Road to Wrestlemania Preview
Picking the 2014 NASCAR Chase for the Sprint Cup