By Dave and Adam's Card World on October 14, 2014 in Sports Card News and New Products, Topps

Topps saves the best for last with their final football release for the 2014 season. 2014 Topps Five Star Football ships this March with plenty of big hits. Every box features four autographed cards plus an additional two autograph or memorabilia cards.

Five Star Autographs make up the bulk of the set with about 100 different players featured, ranging from current stars and rookies to retired players. There are two levels of parallels with Rainbow parallel numbered to 25 and Five Star parallel numbered one of one. Multi-player autograph booklets include Five Star Dual Signature Patch Books which feature a pair of players with their signature and a jersey patch swatch. There are 25 different player pairings with cards numbered to ten. Five Star Quadra-graph Book come with four signatures and are also numbered to ten. 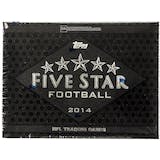 Dave and Adam's is one of the largest sellers of trading cards and collectibles in the world. Located just outside of Buffalo NY, the company operates two retail stores as well as the e-commerce website www.dacardworld.com
View all posts by Dave and Adam's Card World →
2014 Panini Limited Football preview
Friday Night Magic recap for October 3