By Dave and Adam's Card World on December 2, 2014 in Sports Card News and New Products, Topps

Topps is shooting for the stars with their newest product line. 2014 Topps Dynasty Baseball is the highest premium and most expensive product that Topps has ever produced. It’s their first ultra, high-end premium release that attempts to compete with Panini Flawless and Upper Deck Exquisite. Every card in the set is numbered to ten or less, is autographed or features a cut signature and is encased to protect it. 2014 Topps Dynasty Baseball has four different kinds of autograph cards. Autographed Patches feature on-card signatures from current stars, retired legends, and hot prospects and include a jumbo-sized patch relic. In addition to the regular versions of the cards that are numbered to ten there is also a one-of-one parallel. Autographed Dual Relic Greats contain signatures from historic players paired with two relic swatches. A total of six players were included in this set with five numbered cards produced for each player. Topps takes the cut autograph cards up a notch with Cut Signatures Dual Relic Legends. These one-of-one cards feature a cut autograph with two relic pieces. There were only ten of these cards produced. 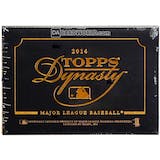 Dave and Adam's is one of the largest sellers of trading cards and collectibles in the world. Located just outside of Buffalo NY, the company operates two retail stores as well as the e-commerce website www.dacardworld.com
View all posts by Dave and Adam's Card World →
2014 Topps High Tek Baseball
2014-15 Upper Deck Series 2 Hockey preview