By Dave and Adam's Card World on September 10, 2014 in Sports Card News and New Products

Today Panini America released the following information on their blog, The Knight’s Lance, regarding the confusion over Freshman Fabric Rewards Points in 2014 Certified Football. 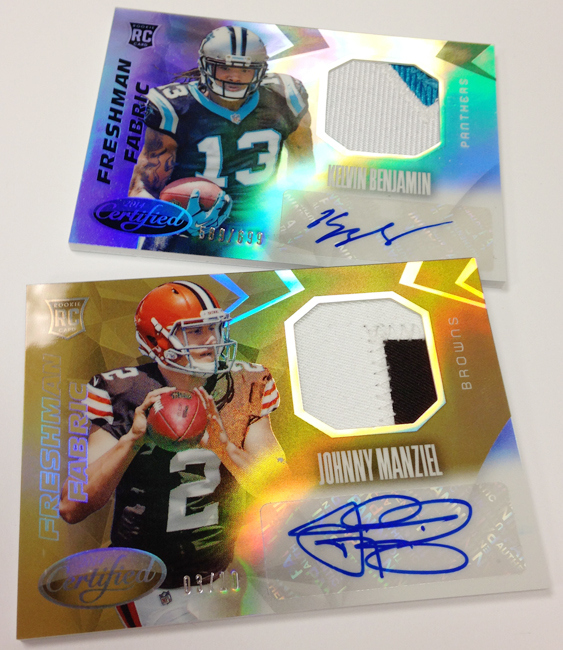 The late-stage insertion of informational fliers inside inner cases of Panini America’s 2014 Certified Football last week has created some confusion among collectors regarding what Freshman Fabric autograph memorabilia cards ultimately made packout. Freshman Fabric autographs for the most popular rookies from the 2014 NFL draft class (including Johnny Manziel, Teddy Bridgewater, Jadeveon Clowney, Mike Evans, Kelvin Benjamin and more) were included live in the product; but Panini America officials inserted Panini Rewards points for 13 players whose autographs weren’t returned in time.

After the jump, we provide a complete breakdown of the 27 players whose Freshman Fabric cards were included live in the product and the 13 players for which Rewards Points were inserted.

Here’s the list of players whose Freshman Fabric cards packed out:

Here’s the list of players whose Freshman Fabric cards were replaced with Panini Rewards points and will be placed into Panini Rewards inventory when they’re available:

Stay tuned to The Knight’s Lance for continued coverage of Panini Rewards.

Dave and Adam's is one of the largest sellers of trading cards and collectibles in the world. Located just outside of Buffalo NY, the company operates two retail stores as well as the e-commerce website www.dacardworld.com
View all posts by Dave and Adam's Card World →
Vintage Graded Cards Purchased at the 2014 National in Cleveland!
Dave & Adam’s at Richmond Comic Con!