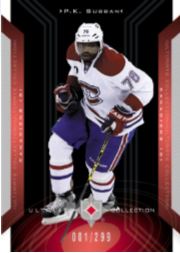 The 2004-05 Retro cards are in honor of the tenth anniversary of the Ultimate Collection Hockey brand. The basic anniversary cards feature a current veteran player, legend or rookie. Ultimate Signature autographed versions of these cards can be found in 1 in 4 packs. There are four levels of retro memorabilia parallel cards: Jersey (#’d to 99), Gold Game Patch (#’d to 25), Blue Game Stick (#’d to 10) and Black Game Tag (#’d to 5).

The numbered base cards in Ultimate Collection also have memorabilia parallels. Base jersey cards are numbered to 199 with Gold Game Patch (#’d to 75), Blue Spectrum Stock (#’d to 25) and Black Foil Button (#’d to 2) parallels. 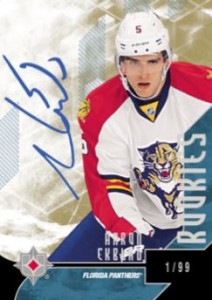 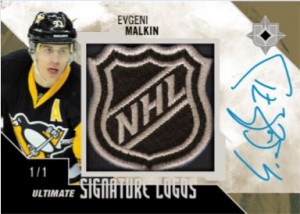 Ultimate Signatures Masterpieces can be found in 1 out 5 packs, and have a signature in gold ink along with a gold frame. The original artwork for these cards will be randomly inserted as a special one-of-one hit. 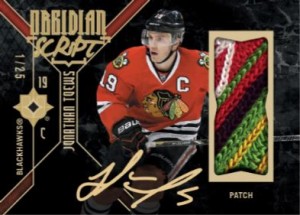 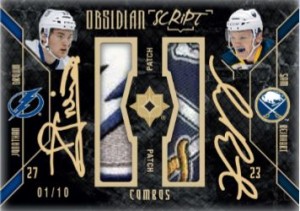 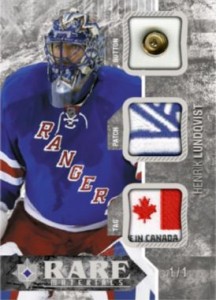 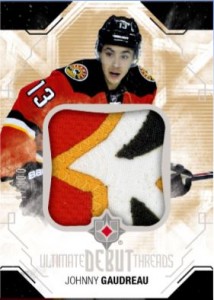 Debut Threads Patch cards (#’d to 100) feature the top rookies and first-year players from the NHL. There are plenty of exciting fresh faces to collect this year, including Johnny Gaudreau, Aaron Ekblad, Sam Reinhart and Jonathan Drouin. 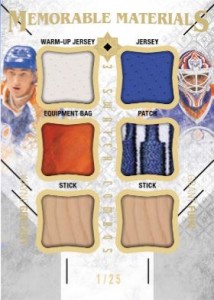 Memorable Materials are dual-player, multi-relic cards. They come with either two (#’d to 49) or three swatches (#’d to 25) per player.

Dave and Adam's is one of the largest sellers of trading cards and collectibles in the world. Located just outside of Buffalo NY, the company operates two retail stores as well as the e-commerce website www.dacardworld.com
View all posts by Dave and Adam's Card World →
Dave & Adam’s Buying Team headed to Chicago this week
2015 Panini Diamond Kings Baseball preview