By Dave and Adam's Card World on October 3, 2014 in Sports Card News and New Products

We are now less than a week away from the beginning of the 2014-15 NHL season. With the puck ready to drop let’s take a look at some young players that could make an impact on the hobby with their rookie cards this season.

Last year, of course, was dominated by Nathan MacKinnon as he went from #1 overall selection to Calder Trophy winner for Colorado. MacKinnon cards continue to attract plenty of attention. If you want to go back and look at some of the rookies from last season, just check out this blog from a few weeks ago. 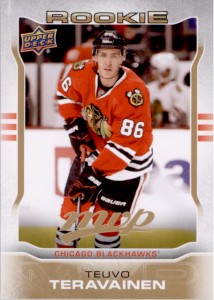 1. Teuvo Teravainen – Chicago Blackhawks: A skilled scorer and playmaker, Teravainen, is already getting some attention by collectors on the potential of him having a breakout season in 2014-15. He scored 44 points in 49 games with Jokerit of the Finnish Elite League before playing a handful games in the NHL and AHL late last season. He was the leading scorer in last year’s World Junior Hockey Championships where he led Finland to the gold medal. The only thing that may hold up Teravainen from making an impact in the NHL this season is the fact that he plays for Chicago. With the Blackhawks already stacked with forwards, including Patrick Kane, Jonathan Toews, Patrick Sharp and newly acquired Brad Richards, it might be hard for the former first round pick to crack the lineup. 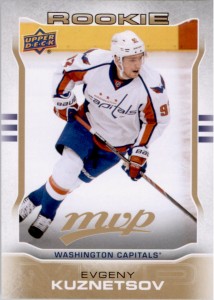 2. Evgeny Kuznetsov – Washington Capitals: Kuznetsov is another player that has rookie cards in some of the early 2014-15 releases and has the potential to make a splash for the Caps. He’s another Russian that can skate and stickhandle like his teammate Alexander Ovechkin and Pittsburgh’s Evgeni Malkin. Kuznetsov spent five seasons in the KHL before joining Washington late in 2013-14. He tailed nine points in his first 17 games in the NHL. At 22-years-old Kuznetsov is a little older than some of the players on this list so he could have the best chance at making an instant impact this season.

3. Jonathan Drouin – Tampa Bay Lightning: Many experts say the 19-year-old Drouin is the leading candidate to win the Calder Trophy this season. He lit up the QMJHL with 213 points over the last two seasons, and now the third overall pick from 2013’s draft is ready to take on the NHL. He did suffer a thumb injury right before training camp started but he’s expected to not miss many regular season games. Last year Tampa had two of the top rookies in the league with Tyler Johnson and Ondrej Palat, and they will have another in Drouin.

4. Johnny Gaudreau – Calgary Flames: “Johnny Hockey” jumped to the NHL last April after finishing his junior year at Boston College. He made his NHL debut in Calgary’s final regular season game and recorded his first professional goal. He wrapped up his college career by leading BC to the Frozen Four and won the Hobey Baker Award as the best player in college hockey. What he lacks in size (stands 5’7”) he makes up for in talent with tremendous stickhandling skills. Gaudreau gained international experience by leading the USA to a gold medal in the 2013 World Junior Championships and scoring ten points in last spring’s World Hockey Championships playing against NHL-level talent. His first rookie cards are available in some of the 2014-15 hockey sets that have already released.

5. Griffin Reinhart – New York Islanders: A big, two-way defenseman that is hoping to make the cut for the Islanders roster this season. His father, Paul, played in the NHL during the 1980s & 90s. His brother, Max, plays in the Calgary Flames’ system and younger brother Sam was the number two overall pick by the Buffalo Sabres in last year’s draft. Reinhart is coming off a season with the Edmonton Oil Kings of the WHL where he led the team to a Memorial Cup championship and was the MVP of the playoffs.

Dave and Adam's is one of the largest sellers of trading cards and collectibles in the world. Located just outside of Buffalo NY, the company operates two retail stores as well as the e-commerce website www.dacardworld.com
View all posts by Dave and Adam's Card World →
2015 Topps Museum Collection Baseball preview
Dave & Adam’s “Leaders of the Pack” for Week 5