Even without an NBA license Upper Deck still manages to put some fantastic basketball products. One thing that helps Upper Deck’s cause is the deals it has with superstars like Michael Jordan and LeBron James. Both his “Airness” and “King James” are featured in 2013-14 Upper Deck Exquisite Basketball along with other star from the past and present.

Upper Deck appears to have taken some pages from Panini’s playbook with this set. The base set is supported with seven layers of parallels that cover the entire color spectrum much like a Panini release. Literally all colors of the rainbow (ROYGBIV) are represented in limited quantities that descend in total as you work down the spectrum. It starts with Red parallels numbered to seven and goes all the way to Violet parallels that are numbered to one.

One other element that is similar to a recent Panini release is the inclusion of shoe cards. UD Signature Kicks come with pieces of soles, heels, laces and logos from some of the all-time greats of the hardwood. Jordan and James both have two different shoes included in this set plus Magic Johnson, Larry Bird, Julius Erving and even Bill Russell’s Chuck Taylors!

Upper Deck expanded on one their own ideas as well with Tegata Signature Impressions. UD’s memorabilia division sells Tegata lithographs, which feature an athlete’s hand print. To make the concept work in card form just the player’s thumbprint is used along with their signature.

This is the tenth anniversary of the first Exquisite release by Upper Deck and to honor it UD has included 03-04 Exquisite Rookie Tribute Cards in this year’s release. The 03-04 set included the rookie cards of LeBron James, Dwayne Wade, Carmelo Anthony and Chris Bosh and is one of the biggest basketball sets of all time. Upper Deck has brought that design back for this year and applied it to stars both new and old.

2013-14 Upper Deck Exquisite Basketball comes with five autographs in every box including one rookie auto patch. Several of the top rookies from this year’s class are in the set, including Shabazz Napier, Aaron Gordon and Elfrid Payton. 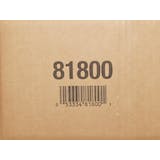 Dave and Adam's is one of the largest sellers of trading cards and collectibles in the world. Located just outside of Buffalo NY, the company operates two retail stores as well as the e-commerce website www.dacardworld.com
View all posts by Dave and Adam's Card World →
Dave & Adam’s buying team brings back “memories” from New York
2014-15 Panini Prizm Basketball preview