Phenomenal Pulls: A Couple Great Cards and Even Better Stories

We’ve got a couple fun stories from box breaks that we had to share. This is what it’s all about.

The first comes from Darrin:

I just can’t believe it.  A couple weeks back I emailed you on our 4 box break of college legends when my son Emmett, 8,  pulled a barry sanders auto.  Well we purchased 4 more boxes during your black friday  sale.  He had been opening up 5 boxes of Thor cards which we also purchased (of course he pulled a Tom Hiddleston auto) and we had one box left of the legends so he opened that up.  After pulling a Daniel Thomas and Alan Page I told him he needed a $30 card to break even.  He says “No problem Dad!”  Well, this is what he pulled.  Just unbelievable. 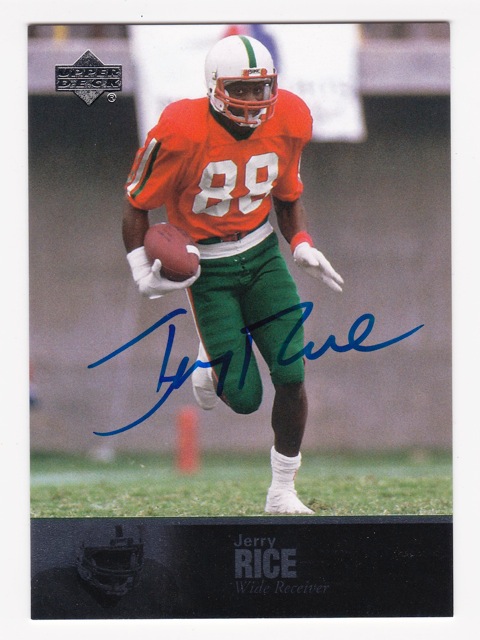 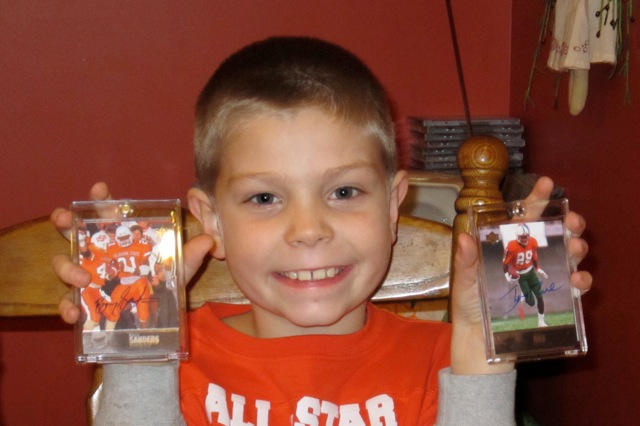 Next up we have Rodney who decided to give some soccer boxes a shot:

Just wanted to share my 4 box break (2011 SP Gamed Used Soccer) which was the limit on Black Friday. This was the first time I ever purchased soccer; I mainly collect basketball cards. I admit, even though I don’t follow this sport, I always hear two big names constantly. First I pulled the Donovan Supreme Fabrics from the first box and I thought that was the big kahuna, then I was on the last box..I slid the first card very slow knowing it would be something good because it was the same thickness as the Donovan..BOOM it was BECKHAM! Two Supreme Fabrics out of four boxes!! I don’t know the odds for these but I think I did pretty good. Both cards are certified as being game used and both are serially numbered out of 15. I have attached the 4 photos (the best pull for each box) and a group photo of the Supreme Fabrics. I hope this story is worthy on making it onto your blog! 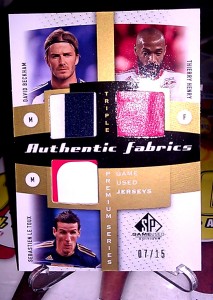 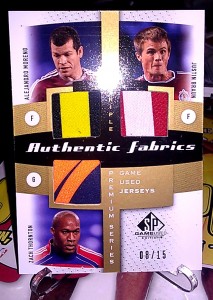 And lastly we have a new collector named Chris who purchased his first hobby box, 2011 Panini Timeless Treasures Football:

I am pretty new to collecting and this was the first hobby box I have ever purchased and I pulled a Matt Ryan 08/10 auto thanks! 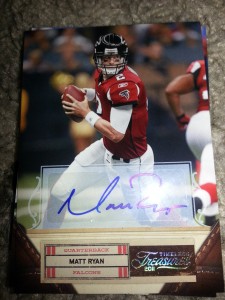 Thanks to all three of these collectors for sharing! There’s nothing better for us than stories like this where we get to share some of the fun and excitement. Young collectors, new collectors, and venturing into new products, just a few of the great things about collecting sports cards!

Pull a great card or have a fun story? You can always email us at [email protected]

Dave and Adam's is one of the largest sellers of trading cards and collectibles in the world. Located just outside of Buffalo NY, the company operates two retail stores as well as the e-commerce website www.dacardworld.com
View all posts by Dave and Adam's Card World →
Have Wrestling Cards Entered a New Golden Age?
Phenomenal Pull: Michael Jordan SP Authentic By the Letter Auto

One Response to Phenomenal Pulls: A Couple Great Cards and Even Better Stories