One of frequent contributors to #DACWPulls is our ‘ol buddy Walt. Walt is a big baseball collector and has had some of his big hits featured on our blog in the past. He recently sent a couple more that he added to his collection. 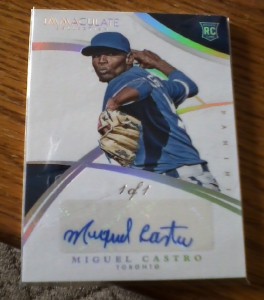 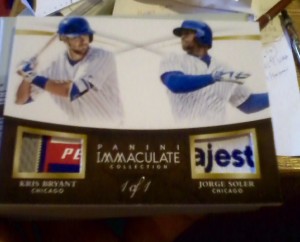 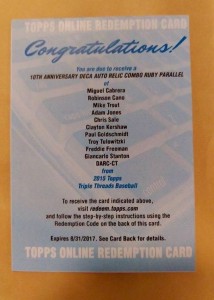 Walt pulled a couple of gorgeous one-of-ones from Panini Immaculate. The first is a rookie auto of Blue Jays prospect Miguel Castro. The second one is an amazing dual relic one-of-one featuring Cubs prospects Kris Bryant and Jorge Soler. The relic appear to laundry tags from the jerseys of two of the most exciting prospects in the hobby. Walt’s third submission is a mind-boggling deca auto relic from 2015 Topps Triple Threads featuring some huge names, including Mike Trout, Chris Sale, Clayton Kershaw and Giancarlo Stanton. This card is a ruby parallel so it is a one-of-one.

One our twitter followers, Bobby J., posted some nice one-of-ones he pulled from 2014 Prestige Football. 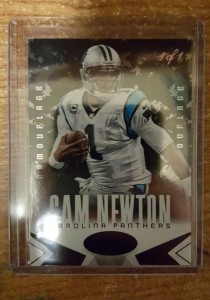 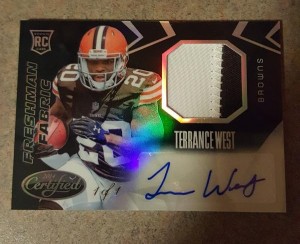 Bobby landed a one-of-one base card of Carolina Panthers quarterback Cam Newton and a patch auto of Terrance West.

If you want to see your hits on the next edition of DACW Pulls, then send them to [email protected] or tweet them to us @DACardworld with the hashtag #DACWPulls

Dave and Adam's is one of the largest sellers of trading cards and collectibles in the world. Located just outside of Buffalo NY, the company operates two retail stores as well as the e-commerce website www.dacardworld.com
View all posts by Dave and Adam's Card World →
2015 Leaf Superlative Hockey preview
Fan vote to decide #1 card in 2016 Topps Baseball trimmed to five