#DACWPulls – Kyrie Irving Logoman Pull in My Own Words

We recently had a customer send us a scan of a Kyrie Irving Logoman that he pulled. We didn’t think what we would write would do the pull justice so we asked Drew to send us a writeup. What follows are Drew’s own words.

I like to preface by saying thank you to Brian and DACW for being my #1 sealed product dealer. I’ve been ordering for many years and have had good conversations talking cards and stuff.  So lately my personal breaks are of the mixer sort, usually 1 to 2 boxes of several products. So this past Wednesday, after a failed eBay auction snipe attempt mind you, I had some funds available to place an order containing an allotment of 2015/16 basketball products. I ordered 1 box of Immaculate, 1 box of Noir, 1 box of Spectra, and a topping of 2 boxes of Gala. I’ve never really pulled any big cards in my 23 years of collecting outside maybe 2ish and had never busted a box of Immaculate basketball either, so I did something I’ve never done the night before my break was to arrive: I wished on 11:11 PM. I kept it vague, but just wanted a boom pull for a change. I followed the rules to keep your eyes shut and make sure your entire wish is within the 60 second window of 11:11 and don’t tell anybody either. Anyways, my order arrived the next morning and I usually open from least expensive to most expensive. Gala was really quiet outside of a Starring Role Signatures of Grant Hill and Spectra had 2 golds including a James Harden prime relic /10. The Noir was rather quiet too based on my previous breaks of that product, but a Myles Turner color acetate bronze /25 was a decent hit. Here comes the finale without a real boom yet. So I slit open the seals on the Immaculate container and notice the base card was Jae Crowder and the back was a duel auto of 2 retired no-names. Next was autos of Dave Cowen and Peja Stojakovic, and then an auto patch of Robert Parish. Well, with things looking gloom, the card that captured my attention was none other than the first time I’ve ever pulled one. Staring back at me was a Logoman 1/3 of Kyrie Irving. I’d call that a boom for someone like me. Great 4 figure cards don’t grow on trees when I bust, so it was a pleasant surprise and a funny coincidence for 2 reasons. 1 is the last time I pulled a decent basketball card was from 13/14 Flawless group break at DACW in a random team, single case break which happen to be Kyrie Irving also, except with a signature and a Cleveland Cavaliers ‘C’ patch in a sealed Panini case. And secondly, I still have game 7 of the NBA Finals on my DVR with Kyrie’s game-winning shot. So that’s 2 Kyrie Irving’s for me. Not a bad player considering how many others on the checklist I could have pulled would be worse in my book.

So to summarize and once again, thank Dave and Adam’s and their great sales team, big mojo boom cards can happen to anyone, at anytime, with just a single box of product, and a little wish of luck. 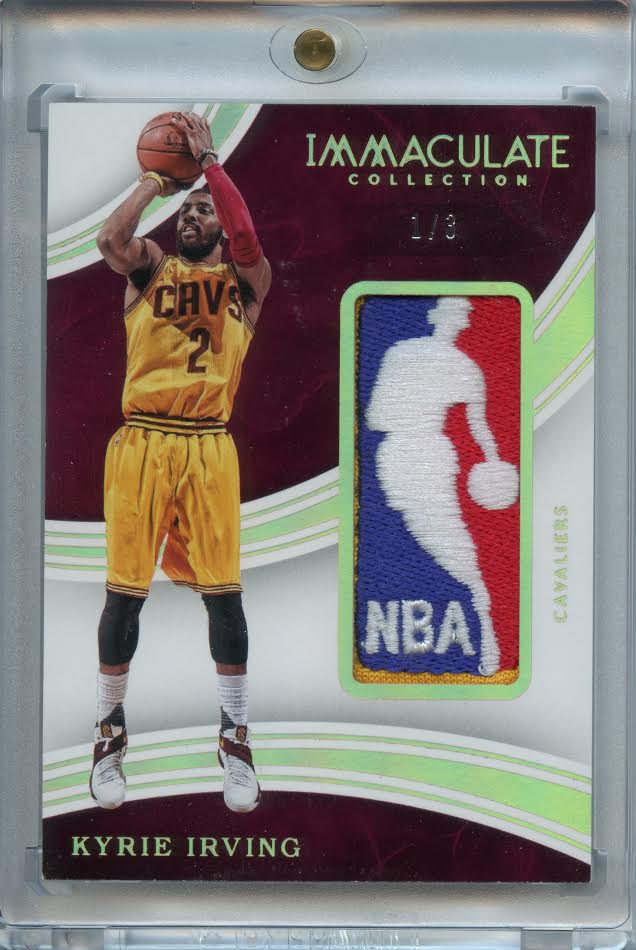