By Dave and Adam's Card World on March 30, 2015 in Panini, Sports Card News and New Products

The first two releases from Panini using their recently acquired college licensing agreements are due out this spring. Both sets will be football releases and concentrate on the 2015 NFL draft class. Panini is using two of their signature brands to introduce these new collegiate products, Prizm and Contenders. Panini announced on Monday that they’ve signed a deal with Marcus Mariota for the Oregon QB to appear in their products. 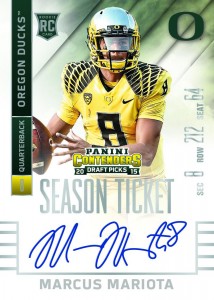 Alumni Ink and Old School Colors will feature signatures from current NFL stars using images from when they played in the college ranks. Tom Brady, Peyton Manning and Drew Brees are some of the players that will appear in the set. Collegiate Collection Signatures are dual autograph cards featuring NFL players that were teammates in college, including Aaron Rodgers & Marshawn Lynch and Andrew Luck & Richard Sherman.

2015 Panini Prizm Collegiate Draft Picks will feature a sold 250-card base set with several levels of Prizm parallels to collect. The base set will have 150 draft prospects plus 100 current NFL stars. Some of the Prizm Parallels that will be in Draft Picks are Camo, Purple Flash, Blue, Tie Dye, Red White & Blue, Gold, Green and Black Finite.

Both draft-eligible players and NFL stars will have autograph content in 2015 Prizm Draft Picks on base and insert card. Insert sets for Prizm Draft Picks include: All Americans, D Fence Die Cut, Helmet Die Cut, Stained Glass and Team Trademarks. 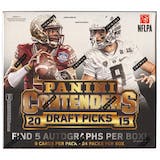 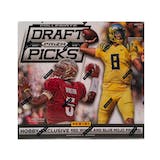 Dave and Adam's is one of the largest sellers of trading cards and collectibles in the world. Located just outside of Buffalo NY, the company operates two retail stores as well as the e-commerce website www.dacardworld.com
View all posts by Dave and Adam's Card World →
2015-16 Upper Deck MVP Hockey preview
2015 Panini Prizm Baseball preview