By Dave and Adam's Card World on August 21, 2015 in Panini, Sports Card News and New Products

Panini unveiled on Friday the details of a new line of multi-sport collegiate team sets utilizing the company’s college licensing agreements. Panini is producing 80-card sets for 19 different schools. The cards will feature athletes that played for the school as well as memorable moments in the school’s athletic history.

They will be sold as complete sets in blaster boxes and 24-pack single pack boxes (8 cards per pack). The blaster box sets will also include one autograph or memorabilia card plus three parallels. There are three levels of parallels: Silver, Gold and Black with Silver cards printed with silver holographic foil. Honors inserts cards will feature award-winning players (Heisman, Naismith, etc.), all-conference team members, conference players of the year and All-Americans. Parallel, insert, auto and memorabilia cards will  be numbered to 99 or less.

These will likely be similar to the sets produced by Upper Deck when they held the trading card rights with the Collegiate Licensing Company.

Panini is producing sets for the following schools: 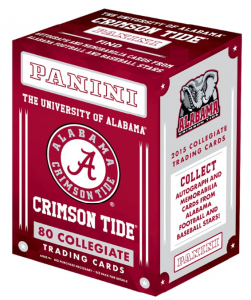 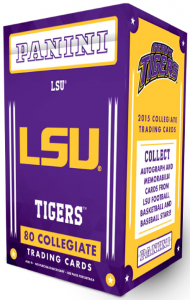 Dave and Adam's is one of the largest sellers of trading cards and collectibles in the world. Located just outside of Buffalo NY, the company operates two retail stores as well as the e-commerce website www.dacardworld.com
View all posts by Dave and Adam's Card World →
2015 Leaf/In The Game Stickwork preview
2015-16 Panini NBA Hoops Basketball preview